‘Alabama jumper’ the latest threat to our ecosystem; here’s what we know about them 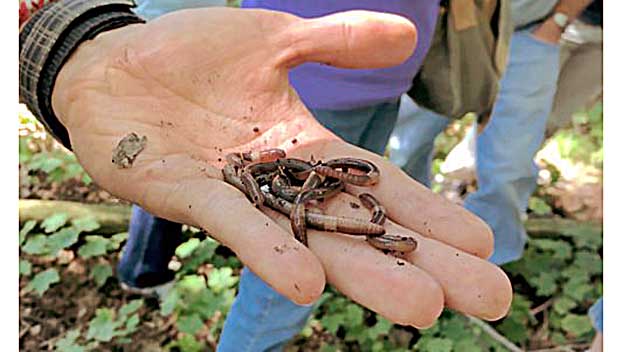 Just when you think you’ve become accustomed to the spotted lanternfly invasion, along comes another menace to the ecosystem: the Asian jumping worm.

Allow me to introduce you to Amynthas agrestis, also known as “Alabama jumper,” “Jersey wriggler” and the rude-but-accurate “crazy worm.” Unlike garden-variety earthworms, these flipping, thrashing, invasive miscreants are ravenous consumers of humus, the rich, organic, essential top layer of soil formed by dead and decaying small animals, insects and leaf litter in places like forests, plant nurseries and your garden.

Plants, fungi and other soil life cannot survive without humus, and “Asian jumping worms can eat all of it,” Sarah Farmer of the U.S. Forest Service wrote in a USDA Southern Research Center blog post published in May.

A decline in humus would also threaten birds and other wildlife that depend on soil-dwelling insects for food.

The insatiable invertebrates, native to east-central Asia, are believed to have been introduced to the United States in the late 1800s, likely as hitchhikers in potted plants. But their existence went largely unnoticed — or perhaps underreported — until the past decade, when ecologists flagged them as problematic, according to Dr. Timothy McCay, a biology and environmental studies professor at Colgate University in Hamilton, New York.

Since then, the worms’ presence has been confirmed in 35 states across the country.

Although their annual life cycle ends in winter, Asian jumping worm cocoons survive to spawn a new generation in spring. Their tiny eggs are nearly impossible to notice in soil or mulch, but adult worms, which range from 3 to 8 inches long, are easy to spot close to the soil surface and can often be seen moving under mulch or leaf litter, McCay said.

As they devour their way through the soil, the worms leave two things behind: cocoons and castings. The cocoons are tiny and soil-colored, so they are easy to miss. However, the castings, or excrement, have a granular, coffee-ground texture that will alert you to their presence.

The glossy worms can be either gray or brown, with a smooth cream or white collar that wraps entirely around part of their bodies. When touched, they thrash from side to side, jump, and may even slither back and forth like a snake. That behavior, coupled with their ability to reproduce rapidly without a mate, gives them an advantage over predators, McCay said.

“Robins and other birds, shrews, garter snakes, and amphibians like toads may not be able to effectively suppress their populations,” he said.

McCay, whose research focuses on understanding how the worms invade intact forests, and their effect on forest biodiversity, cautions that “gardeners should do what they can to avoid spreading jumping worms to new areas.” Because the worms typically move into forests from nearby gardens, he said, control in home and community gardens is necessary to slow their invasion into natural habitats.

So during this season of plant dividing and swapping, gardeners must be vigilant. Keep an eye out for the worms’ castings, a tell-tale sign of their presence. Inspect the soil clinging to plant roots and in the ground surrounding them. In addition, McCay advises, do not dispose of waste from infected gardens into nearby forests, and share only plants that have been repotted after their roots have been cleaned of clinging soil.

Unfortunately, there are no good control measures available for established populations of jumping worms. But McCay said picking them out by hand and dropping them into containers of vinegar will reduce their numbers. He knows of one gardener in Susquehanna County, Pennsylvania, who removed 51,000 worms that way in 2021.