I-85 shooting suspect was driving around with 10 firearms and more than 2,000 rounds of ammo, police say 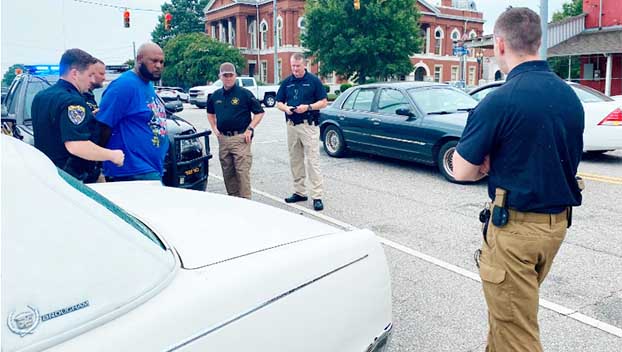 A man arrested in connection with three interstate shootings in Alabama and Georgia had more than 2,000 rounds of ammunition and an alarming number of firearms in his car, police said Thursday.

The Auburn Police Department also said they so far have not found a motive for the “seemingly random shootings.” Jerel Raphael Brown, 39, of Montgomery, Alabama, was arrested in LaFayette, Alabama, on Wednesday after shootings were reported in Montgomery and Auburn in Alabama and near Hogansville, Georgia.

Auburn Assistant Police Chief Michael Harris said authorities found “a large cache” of firearms and more than 2,000 rounds ammunition in Brown’s vehicle. Police released images of a table filled with what appeared to be three handguns, at least seven long guns with scopes, clips and boxes of ammunition that they said were recovered from the car.

“Because of the alarming amount of weaponry recovered, combined with the actions of the suspect, there can be little doubt that the immediate collaborative efforts of all the agencies involved ended an act of danger to the public that spanned multiple communities and into multiple states,” Harris said.

Brown is charged with attempted murder and shooting into an unoccupied vehicle in connection with the Auburn shooting that seriously wounded a 45-year-old motorist.

Brown is being held without bond, and court records did not indicate if he has an attorney to speak on behalf.

Officials had asked people to look for a 1996 white Cadillac Fleetwood after the three shootings were reported. In the Auburn shooting, a 45-year-old Prattville, Alabama, man was seriously wounded by a gunshot that officials said appeared to enter from the rear of the man’s vehicle. The victim was taken by helicopter to a Montgomery hospital.

Harris said police began investigating the Auburn shooting at about 6:15 a.m. Wednesday, and later learned that a shooting had occurred an hour earlier in Montgomery, Alabama and then an hour later in Troup County, Georgia. The three communities are about 55 miles (88 kilometers) apart along Interstate 85.

A stretch of Interstate 85 in Auburn was closed for hours while police investigated.

No one was injured in the Georgia shooting. No details on the Montgomery shooting were immediately released.

Deputies in western Georgia’s Troup County said they identified the suspect vehicle using a traffic camera, allowing information about the car to be broadcast around the region. Authorities said that led to a Chambers County, Alabama, sheriff’s deputy pulling Brown over and arresting him. Brown was later handed over to Auburn police.