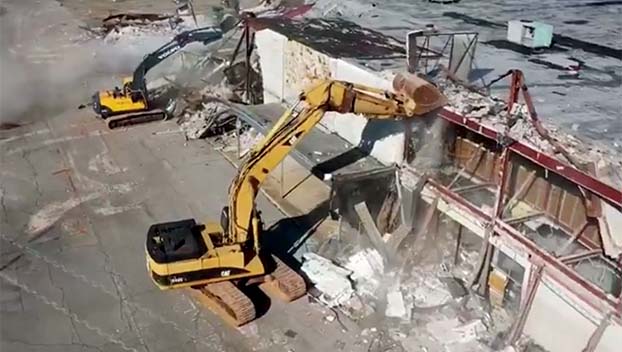 An Alabama businessman invites the public to watch as an abandoned relic of shopping history makes way for a brighter future for youth sports and recreation.

The demolition of McFarland Mall, a mall built in the 1960s in Tuscaloosa, was set to begin at 8 a.m. Tuesday.

Property owner and local businessman Stan Pate is streaming live footage of “phase one” of the 2.5-acre plot’s flattening on Facebook.

“We’re gonna take care of business here and put this mall — first phase — on the ground,” Pate said in a Monday Facebook video. “We’re gonna try to do it in less than two hours. Been a long time coming.”

In the video, Pate said the plan is to redevelop the property into “a regional sports-plex” beginning with the 2021 demolition. Stan Pate and Amason Associates announced via press release last week that they’ve engaged Sports Facilities Advisory (SFA), LLC, to begin a market study to determine the specific aspects of the future mixed-use, multi-sport and events facility.

Pate said in the release, “The engagement of SFA is the first step on a tall ladder as we climb to the top rung to reach our goal: The best sportsplex in the country.”

The mall was built in 1968 and opened in 1969. Throughout the years, it was home to Gayfers department store (later Dillard’s), plus the Fox 12 movie theater (later a Regal franchise), a food court and other businesses like Woolco, TJ Maxx, Mall Shoe Repair, Orange Julius, Zayre, Drug Mart, Lee’s Big and Tall, Aladdin’s Castle arcade, Diamond Jim’s arcade, Goody’s, Piccadilly Restaurant, Bookland, The Athlete’s Foot and many others.