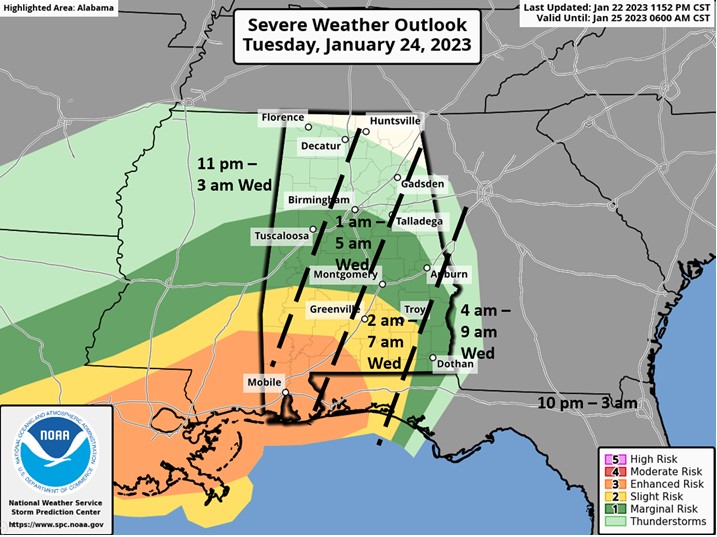 Forecasters continue to alert people in parts of Alabama about the potential for tornadoes, large hail, and damaging winds later tonight. Although parts of the state will remain cool, areas south of Montgomery will warm up quickly as the warm sector of a powerful cold front takes hold. Areas that do become humid and warm today will have the best shot for severe weather Tuesday night and early Wednesday morning. Just about the entire state is under a wind advisory through Wednesday afternoon.

A Level 2 risk area circles the Level 3 and includes Butler, Greenville, and Andalusa. People in this risk level can expect possible tornadoes, damaging winds up to70 miles per hour, and large hail.

Right now, forecasters expect storms to move into the area around 1 a.m. and leave the state around 7 a.m.

Mostly sunny through most of the day with some sprinkles moving in late afternoon. High of 53. Showers tonight with a low of 46. Winds could gust as high as 40 miles per hour. Rainfall up to one inch.

Sunny and a high of 56. Tonight, showers are likely with some thunderstorms possible. Low of 47. Winds could gust as high as 40 miles per hour. Rainfall up to one inch.

Sunny today with a high near 60. Showers move into the area tonight with some severe thunderstorms possible. Temperatures rising to 58 by dawn. Winds could gust up to 40 miles per hour with rainfall up to two inches possible.

Mostly sunny with a high near 67 today with wind gusts up to 25 miles per hour. Showers and thunderstorms tonight with some storms severe. Temperatures rising to 74 degrees around midnight. Winds could gust up to 40 miles per hour. Rainfall up to an inch possible.