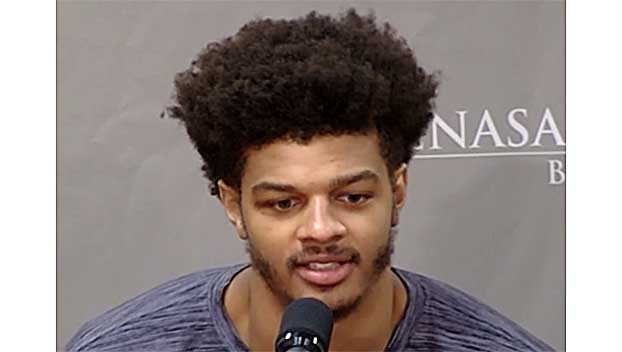 Investigators said a University of Alabama basketball player charged with capital murder provided the gun used in the fatal shooting, but another man fired the weapon.

Investigators wrote in a court document that Darius Miles admitted to providing the handgun immediately before the shooting. Another man is accused by police of firing the gun and killing a young woman near the university’s campus, according to court documents filed in Tuscaloosa, Alabama.

Miles, 21, a junior reserve forward from Washington, D.C., and Michael Lynn Davis, 20, of Charles County, Maryland, are charged with capital murder for the shooting death of 23-year-old Jamea Harris. The shooting that occurred early Sunday morning on the Strip, a student-oriented business district of bars and restaurants near the Tuscaloosa campus, police said. Harris was sitting in the passenger seat of a car when she was struck by a bullet, investigators wrote in the court document.

The University of Alabama said in a statement that Miles is no longer on the basketball team. The fourth-ranked Crimson Tide is scheduled to play Vanderbilt University on Tuesday night in Nashville.

Defense lawyers for Miles released a statement on Monday saying Miles maintains his innocence and that he and his family “are heartbroken” over Harris’ death.

“While Darius has been accused of being involved with this tragedy, he maintains his innocence and looks forward to his day in court,” they said. “Our firm’s own investigation is ongoing, and no further statement will be made at this time,” attorneys William White, Clayton Tartt and Suzanne Norman from the the Birmingham-based Boles Holmes White law firm wrote in the statement.