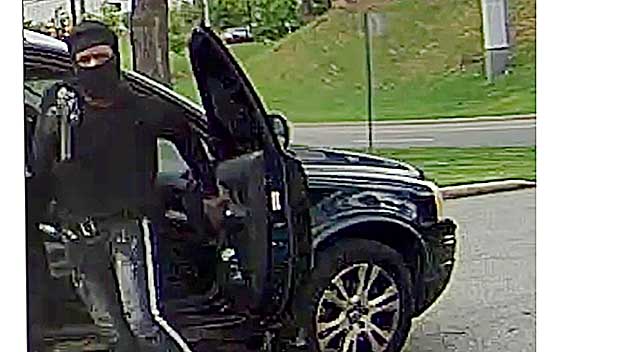 Police say an Alabama man was killed in an ambush Sunday as he was doing business at a bank ATM machine.

Homewood police released photographs showing the suspect, who was wearing a facemask and riding in a Volvo SUV.

The victim, Justin Jamond Hendrix, 34, of Birmingham, Alabama, was doing a transaction at a standalone ATM owned by Wells Fargo Bank on West Valley Avenue in Homewood when the shooting occurred, at approximately 12:43 p.m.

Hendrix was pronounced dead at the scene.

Police say they believe the shooting was not random, but was a targeted ambush on Hendrix, though no potential motive has been released.

The murder was captured on security video, police said.

The footage, investigators said, shows a black Volvo XC90 drive up behind Hendrix. The shooter emerges from the passenger side of the care and fires multiple shots at Hendrix.

Investigators ask that anyone with information about the crime call the Homewood Police at (205) 332-6200.