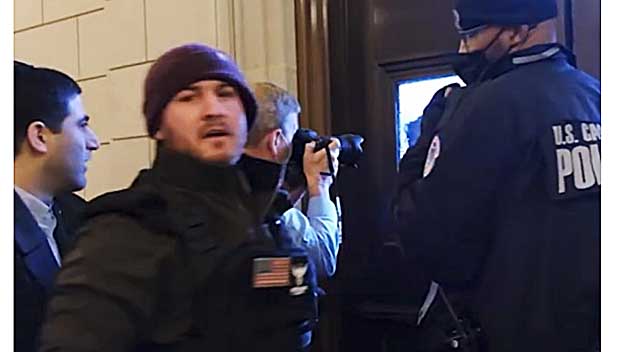 An Alabama man was arrested Tuesday on charged he illegally entered the U.S. Capitol on January 6, 2021, and assaulted and interfered with police officers.

The man, identified as Kaleb Dillard, 26, of Columbiana, Alabama, faces felony and misdemeanor charges for his actions during the breach of the U.S. Capitol on Jan. 6, 2021. Images in the charging documents show Dillard wearing body armor and engaging in assaults against police, federal prosecutors allege.

His actions and the actions of others disrupted a joint session of the U.S. Congress convened to ascertain and count the electoral votes related to the presidential election.

Dillard is charged in a criminal complaint filed in the District of Columbia with the felony offenses of assaulting, resisting, or impeding law enforcement officers and interfering with a law enforcement officer during a civil disorder. He also is charged with six related misdemeanor offenses. Dillard was arrested today in Columbiana. He is to make his initial appearance today in the Northern District of Alabama.

According to court documents, on Jan. 6, 2021, Dillard illegally entered the Capitol Building through the East Rotunda doors at approximately 2:26 p.m. Once inside, he made physical contact with two officers from the U.S. Capitol Police.

In the 19 months since Jan. 6, 2021, more than 860 individuals have been arrested in nearly all 50 states for crimes related to the breach of the U.S. Capitol, including over 260 individuals charged with assaulting or impeding law enforcement. The investigation remains ongoing. Anyone with tips can call 1-800-CALL-FBI (800-225-5324) or visit tips.fbi.gov.