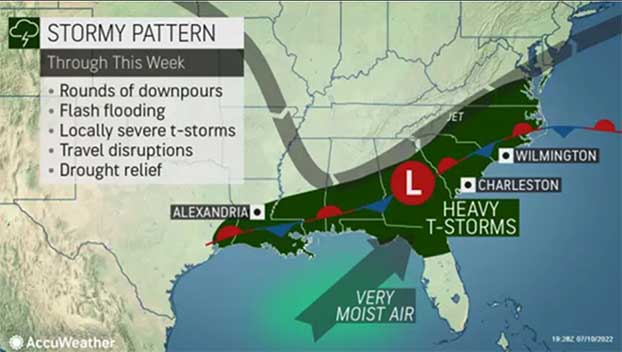 Forecasters say a soaking and dreary week is in store for portions of the Gulf Coast as rounds of showers and thunderstorms target the region. While rounds of robust storms will increase flooding concerns across the area and may even brew up tropical troubles, this pattern will also work to fight ongoing drought.

Since the beginning of July, daily rounds of showers and thunderstorms have occurred across a large swath of the southeastern United States, but the coverage and intensity of these storms have increased in recent days.

“A stalled front will continue to bring rounds of showers and thunderstorms across the southeastern United States from the Carolinas to the central Gulf Coast,” AccuWeather Meteorologist Rob Richards said.

This week, thunderstorms are forecast to rumble to life daily across areas from Louisiana and Mississippi eastward into Florida and the Carolinas. With plenty of moisture to work with in the lower and middle levels of the atmosphere, storms can become very robust very quickly.

“Some of these thunderstorms will produce locally heavy downpours and can lead to flooding concerns, especially in low-lying and poor drainage areas,” Richards said.

It is unlikely that thunderstorms will overspread the entire area of concern on a daily basis, as storms that develop are forecast to be more scattered in nature rather than organized lines. In a pattern like this, some locations can be soaked by a drenching thunderstorm while areas just a few miles away can stay completely dry.

Areas that receive drenching rainfall in a very short window of time can quickly encounter flash flooding issues. Flash flooding can lead to dangerous travel conditions as roads may become impassible for a time or even damaged as a result of floodwaters. Forecasters urge travelers impacted by flooding to never forge flooded roadways, because just 6 inches of flowing water can lead to tragic results.

While flash flooding is a serious concern this week, any rainfall will help to ease drought conditions currently in place across several Southeastern and Gulf Coast states.

As the week progresses, thunderstorms will continue to target the Southeast. However, the heaviest of these storms will begin to hone in on a more confined portion of the Gulf Coast as a potential tropical concern arises.