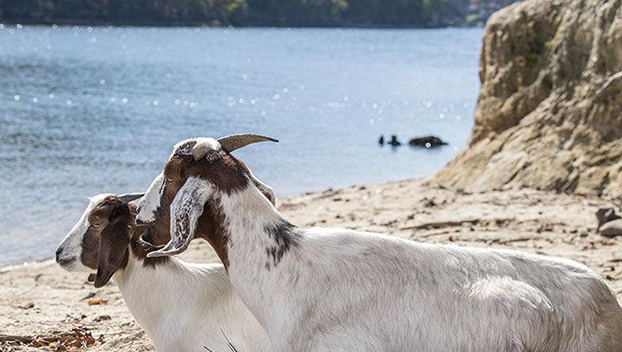 For years, the Alabama Power-owned island had been a Lake Martin tourist attraction for the novelty of its free-roaming goats. The animals, owned by Ricky and Stacie Baker, live on the mainland in the winter but are brought to the island each spring to graze, and to charm visiting boaters.

But in a Facebook post Thursday, the Bakers announced that tradition would be coming to an end.

“It saddens our family to inform the Lake Martin community that we will no longer be putting the goats on the Island,” the Bakers wrote. “Providing our goats for everyone to enjoy has been an honor and we feel privileged to have had the opportunity. [In] the last couple years, we have faced and overcame many challenges and think that it is the best decision for the goats as well as our family.”

Last year, the Bakers reported that one of the goats, Rosie, had been attacked by a dog and chased into the water. According to the Facebook post at the time, if it weren’t for the two boaters who dove into the water after, Rosie would have likely drowned.

A statement put out by Alabama Law Enforcement Agency (ALEA) on the incident said that because Goat Island is open-use, there is nothing law enforcement can do to stop people from allowing their dogs on the island.

“We do ask that boaters follow the suggested signs and keep their dogs away from the goats, but we also ask that people refrain from confronting one another in a hostile, verbally or physically threatening manner — because those actions may be illegal and may result in charges against the parties involved,” ALEA stated.

According to the Bakers, the tradition is no longer worth the risk. Thursday’s Facebook post was shared more than 650 times and received over 300 comments, most of which nostalgic, but understanding.

“Fortunately, with last years’ challenges, we didn’t lose any goats, so we feel like it’s the right time to end on a good note,” the post continued. “We really appreciate all of the support over the last few years, we couldn’t have continued it as long as we did without you all. We hope that everyone can respect our decision as it is best for [the] family.”