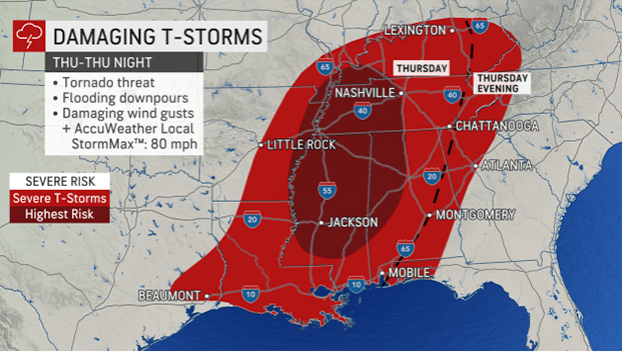 A springlike setup is in place across parts of the nation’s midsection with unseasonably warm and moist air clashing with incoming colder air, AccuWeather forecasters say. This battle between warm and frigid air will produce a volatile round of severe weather that could result in a significant tornado threat from late Wednesday through Thursday.

This severe weather is unfolding on the warmer edge of a robust storm system that is expected to impact much of the eastern half of the United States through the end of the week with flooding rain, heavy snow and powerful winds.

While much of the central and eastern portions of both Oklahoma and Texas will be at risk on Wednesday night, the threat of severe thunderstorms will cover a much larger area Thursday as storms track to the east.

“Winds high in the atmosphere are expected to be transported to the surface, and there will be a risk of tornadoes from the Texas-Louisiana border to Alabama,” said AccuWeather Meteorologist Jessica Storm.

As warm and moist air surges northward, the risk for severe thunderstorms will not stay confined to locations near the Gulf Coast. Cities as far north as Louisville and Lexington, Kentucky, could be in line for potent storms.

Powerful winds could gust to 70 mph with an AccuWeather Local StormMax™ of 80 mph anywhere from eastern Texas through eastern Kentucky and Tennessee. In addition, there will be a tornado threat with the strongest of the storms.

“Major cities like New Orleans; Jackson, Mississippi; Memphis and Nashville, Tennessee; Montgomery, Alabama; and even Atlanta are at risk for severe weather Thursday into the evening,” stated Storm.

The National Weather Service’s Storm Prediction Center (SPC) had labeled the severe weather threat for Thursday as “slight.” The slight risk is considered to be 2 on the scale from 1 to 5 with 5 posing the greatest threat. More than 20 million people live in an area highlighted as a slight risk for severe thunderstorms by the SPC.

The battleground in the atmosphere between warm and cold air will add strength to the thunderstorms.

“Temperatures in Gulf Coast states will be in the 70s and even 80s at their peak on Thursday,” noted Storm.

For example, the forecast high in Montgomery, Alabama, is 76 degrees on Thursday. Typically, the city does not see values that high until early April. Other locations in the region will also achieve high temperatures more representative of April as well.

Farther to the north and northeast, there will be little to no risk of severe weather. However, heavy rain will be a threat. This will elevate the flood risk, especially in locations where the ground is frozen and a significant amount of snow remains on the ground. This will cause much of the rain to runoff, which can cause small streams to flood as well as flooding in urban areas.

Behind this dynamic system, a snap back to reality will occur.

“By Friday morning, temperatures will have fallen as low as the 30s and 40s across the western Gulf Coast,” said Storm.

Thunderstorms could continue into Friday in the northeastern Gulf and southern Atlantic and mid-Atlantic regions. These storms are not forecast to pack the same punch as the storms between Wednesday night and Thursday evening. That said, locally heavy rain and gusty winds will still be possible with the stronger storms.

A dry and seasonable Saturday is expected, and the tranquil weather will continue into Sunday, with temperatures above normal once again.