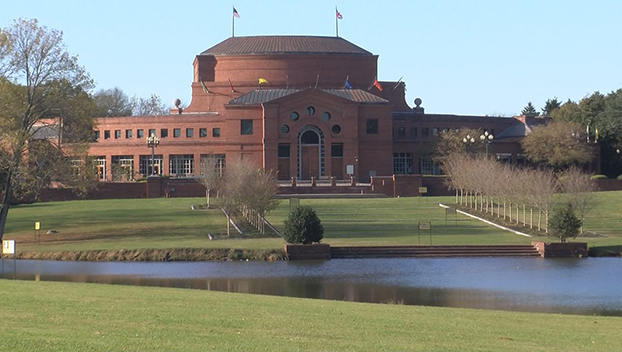 With William Shakespeare’s tragedy “Macbeth” — which opened last Thursday on the Festival Stage for Alabama Shakespeare Festival’s 50th season — director Rick Dildine is ready to take audiences on a tour through dark desires.

“What if our leader’s ambitions went unchecked?” said Dildine, ASF’s artistic director. “It is certainly a tragic tale of this couple’s downfall. They get so incredibly wrapped up in power that it causes their ultimate destruction.”

Summing it up, Macbeth is a Scottish general who slays the king of Scotland, becomes the king, and then keeps killing others in an attempt to hold onto power.

Dildine said he’s been having fun amidst the carnage and tragedy, preparing ASF for one of Shakespeare’s most popular plays. .

“This show is action packed,” Dildine said. “It has major battles.”

“We are telling what I’m calling a timeless, Scottish folktale,” Dildine said. “It is set in a broad Scottish medieval time period, with live music that has been inspired from the period.”

“I set the bar very high in putting together this ensemble of people who are great actors, swordsmen and musicians,” Dildine said. “It’s a very talented company of actors.”

Of course, it also has a touch of witchcraft.

“There are three characters who are witches that lay the groundwork for Macbeth’s ambitious pursuits,” Dildine said.

Written by Shakespeare in 1606, it’s a tale that resonated with England’s people and ruler of the day, King James, who came to the throne from Scotland. Queen Elizabeth had died three years earlier.

“At the time the play was written, the new king of England was convinced that treason was connected to witchcraft,” Dildine said. “These are ideas that are lost on us today, but during that time period Shakespeare’s audiences would have immediately caught up on that. The king of England would have caught on it too.”

Shows will run through Feb. 24. Tickets for the 2 hour production, with one intermission, are available online at asf.net/macbeth-2022, or by calling 334-271-5353. This production is recommended for ages 13 and up.

“I think our audiences are really in for a big treat,” Dildine said. “Folks have been asking for a big Shakespeare play for some time since I’ve been here. This just fits the bill… It’s a perfect play for first time Shakespeare attendees, and for those who love Shakespeare and have seen a lot of it.”

Leaping forward to today, the pandemic is still affecting preparations by actors, and this year’s third return to live indoor theater at ASF.

“We rehearse mostly in masks,” Dildine said. “We test twice a week. But I will say this is one of the best companies of actors that I have ever worked with. It is an exceptionally talented bunch. We have new precautions, but the folks have met the challenge.”

Audiences are still required to do their part as well. Guests must wear masks, and must provide either proof of immunization or a negative COVID test result from within 72 hours of the production. ASF’s full COVID policy is online at asf.net/covid-policy-patrons-2022.

Alabama man arrested after argument with brother over money…