Alabama tailback Brian Robinson Jr. has a pulled muscle that makes his status for the Southeastern Conference Championship Game against No. 1 Georgia uncertain.

No. 4 Alabama’s coach Nick Saban said Sunday that Robinson sustained a “lower body pulled muscle” in Saturday’s four-overtime victory over Auburn. Robinson was holding his left leg on the ground after a 37-yard carry in the fourth quarter of the 24-22 Iron Bowl win.

“We’ll just kind of see how he progresses during the course of the week and see where he’s at,” Saban said. “I can’t tell you any more than that right now.”

Robinson didn’t return in the game. Trey Sanders took over in the backfield.

Alabama was already down to three healthy scholarship tailbacks with injuries to Jase McClellan, Roydell Williams and freshman Camar Wheaton.

Robinson easily leads the team in rushing with 1,016 yards and 14 touchdowns. Sanders has 50 carries for 221 yards and two TDs.

Alabama has already moved several players from other positions to shore up the backfield in emergency roles.

Defensive back Jalyn Armour-Davis missed the Auburn game with a hip injury. Saban called him day to day. 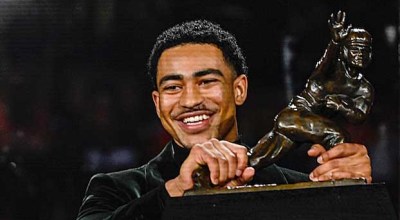 ‘Wow, what a game’ Saban says after Alabama narrowly…