Alabama’s ‘Nimblewill Nomad,’ 83, is back home after becoming oldest to hike Appalachian Trail 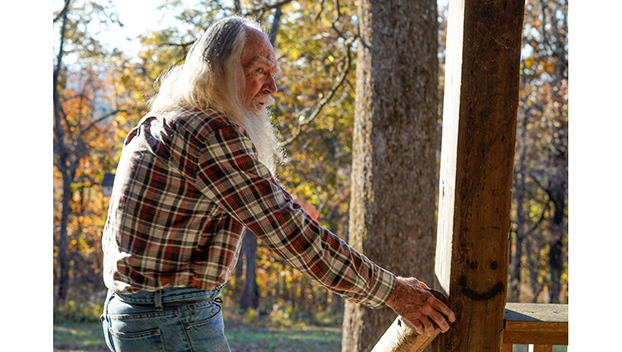 Earlier this month, M.J. “Sunny” Eberhart, 83, broke the age record to become the oldest person to hike the Appalachian Trail.

This week, “Nimblewill Nomad,” as he’s known on the trail, is back at home — a ranger cabin atop Flagg Mountain, Coosa County. The only hiking he’s done since returning is the short walk between the woodpile and his fireside rocking chair.

“I cannot express how happy I am to be here,” said Eberhart, who has declared the 10-month journey his final long-distance hike.

For the past few years, aside from a few sub-ins during his hiking adventures, Eberhart has been the caretaker at Flagg Mountain, a part of western Coosa County’s Weogufka State Forest, overseeing the cabins, trails and lookout tower. The volunteer position began as a handshake agreement with the Alabama Forestry Commission and the Alabama Hiking Trail Society.

“This will be the ultimate journey in this old man’s life, one of body, mind and spirit,” he wrote in his first journal entry on the “’Bama to Baxter” hike.

Traditionally, northbound hikers of the Appalachian Trail start their journey at Springer Mountain, Georgia, and terminate at Mount Katahdin, Maine. But some, seeking an even greater challenge, begin in Alabama at Flagg Mountain, linked to Springer by the Pinhoti and Benton MacKaye trails.

For years, Eberhart had advocated for making Flagg Mountain the official southern terminus of the Appalachian Trail. After all, Flagg is the southernmost peak in the Appalachian Range above 1,000 feet. Stand atop the mountain and face south, Eberhart tells visitors, it’s flat as far as the eye can see; face the other way, and a ripple of hills extends northward.

“I’ve gone from one real strong position in favor of extending the trail — probably one of the biggest proponents of that, maybe up until as recently as 10, 15 years ago,” Eberhart said. “But since then, I’ve had an opportunity to really study the issue and I’ve become more informed as far as the impact the trail has had on certain parts of the Appalachian range.”

For one, when it comes to the most obvious benefit of extending the trail — as an economic boon for Coosa County — Eberhart is skeptical.

“You’d say, ‘Well, the more people we have coming in here, the more folks are dropping off hikers, the more use we’re going to have for our infrastructure,’” he said. “Well, I can’t see that being a great benefit. We don’t have a motel anywhere in this entire county… you’re not going to benefit Coosa County to an extent because we just don’t have the infrastructure.”

But more important to consider, Eberhart says, are the drawbacks.

Eberhart has trod nearly every corner of the United States, and has lost so many toenails he finally had them surgically removed. Aside from the southern Appalachians, where he is reminded of his upbringing in the Missouri Ozarks, one of his favorite places to hike is the Arizona desert. The last time he hiked the Appalachian Trail was in 2000. Even then, he recalls some trail degradation from what he refers to as the “Vibram Army,” referring to the manufacturer of rubber hiking-boot soles that leave behind a distinctive tractor-tread.

Twenty-one years later, however, what he saw made him hate to consign Flagg Mountain to such a fate.

“The degradation is just staggering,” Eberhart said. “Some places it just looks like you’re walking a creek bed and there’s nothing left but rocks. The erosion is just incredible.”

Then there’s the impact all those hikers — some three or four thousand each year — have on each other. It’s the tragedy of the commons.

“One of the reasons we go to the trail, we go to the woods, we go to experience the beauty of the forest is the solitude,” Eberhart said. “That’s directly impacted by the number of people you may be passing or meeting or you hear them coming down the trail.”

The Pinhoti Trail, “the longest Approach Trail to the Appalachian Trail,” as its main patron and promoter Mike Leonard has declared it, has yet to take such a pounding from the Vibram Army. Eberhart hopes to keep it that way.

At the same time, Eberhart is one of the biggest champions of Flagg Mountain and the Pinhoti Trail. Anyone who drives up the long, dirt road to stay in one of Flagg Mountain’s ‘30s-era log cabins can expect to be warmly greeted by “Nimblewill Nomad” and encouraged to spread the word. At times, it can feel like two opposing forces.

“I am wrestling with it,” he said. “Because it’s kind of starting to snowball and rolling down the hill it gets bigger and bigger and you’re not going to stop it. Certainly, I’m promoting awareness of the Pinhoti Trail, and I have misgivings at times. It’s very successful; people are hearing about our trail and more people are coming to hike it. I just don’t want that to get out of control.”

It’s an unanswerable question — how to enjoy nature, when the very act of doing so prevents others from doing the same — and Eberhart doesn’t claim to have an answer.

“And I’m selfish, let’s admit it,” he said. “I’m selfish to think that I would like to have it more like it is now, so that I can go out there now and experience it and not have you and 200 other people right there in front of me all day long. Does that makes sense?”

As long as the Pinhoti is not the Appalachian Trail, as far as the record books are concerned, Eberhart is its oldest hiker. The honor was previously held by his friend, Dale “Graybeard” Sanders.

Tack on the Pinhoti Trail, however, and technically, Eberhart has yet to hold that title. When he began his long hike in February, he started at the stone tower; it felt more ceremonial than starting at the .9-mile approach trailhead. As such, Eberhart has yet to complete his ‘Bama to Baxter journey by less than a mile.

This Sunday, the forestry commission and hiking trail association along with friends, family and visitors will watch Eberhart finish the job (order doesn’t matter, as long as every stretch of trail is covered within a calendar year). The hike will end where it began, at the Flagg Mountain lookout tower.