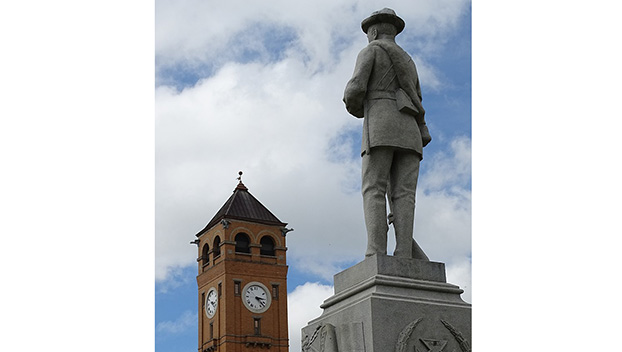 A council member using a saw cut into a 115-year-old Confederate memorial at the center of historic Tuskegee on Wednesday but failed to topple it, marking the latest move in a push to remove the contentious monument from the nearly all-Black Alabama town.

Johnny Ford, a former mayor whose City Council district includes the park where the monument is located, said he took action because constituents voted in a public meeting last week in favor of removing the rebel memorial, which has been the subject of complaints and a target for vandals on and off for years.

Using a lift to reach the statue of a Confederate soldier atop a stone pedestal, Ford said he sawed into a leg of the memorial, which was erected by the United Daughters of the Confederacy. The group has refused to take down the statue even though Tuskegee, a town of 8,100, is 97% Black and known internationally as a home of Black empowerment.

Ford said he stopped cutting when Sheriff Andre Brunson showed up and asked him to quit. But Ford said the fight isn’t over.
“We can’t have a Confederate statue which represents slavery standing up in the middle of our town,” Ford said in an interview with The Associated Press.

Brunson said it appeared Ford and another man had cut all the way through one ankle of the statue with an electric saw, but an engineer would have to conduct a full assessment. Neither man was arrested, Brunson said, but a report will be sent to the district attorney and he added charges are possible.

“I understand what many people think and what he thinks, but it’s still destruction of property,” Brunson said.

Tuskegee is the home of Tuskegee University and the place where the first Black military pilots, the Tuskegee Airmen, trained during World War II. Leaders previously draped the monument’s pedestal with tarps to cover pro-Confederate writing, and the statue itself was covered later by Ford.

Demonstrators protesting the shooting death of a civil rights worker in 1966 attempted to pull down the statue but failed. It was been vandalized with spray paint several times in recent years.

Louis Maxwell, the chairman of the Macon County Commission, said the county wants the statue removed and has been talking with an attorney for the United Daughters of the Confederacy, which owns both the monument and the plot where it’s located under an arrangement dating back to 1906.

Maxwell said he feared Ford’s action might be a setback to avoiding a lawsuit.

“This had quieted down to give us a chance to work on it, but now it’s going to rear up again,” he said.