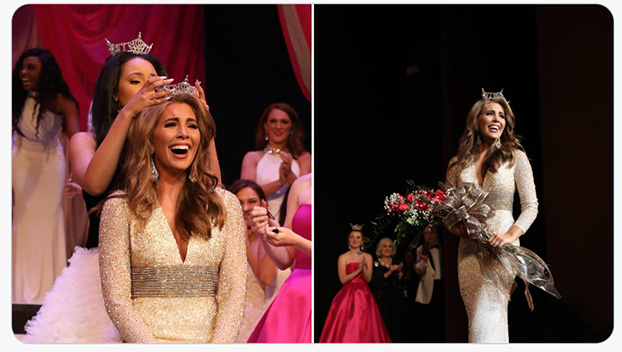 The new Miss Alabama treasures a handwritten note that she received from Oscar-winning actor Morgan Freeman after leaving a pie at his front door years ago.

Lauren Bradford, 21, told Al.com that she left a frozen chocolate pie and a calligraphed welcome note for Freeman doorstep after spotting him at the golf club in Gulf Shores.

“It was Thanksgiving, and I was a senior in high school, and I was like, ‘I want to meet him, I want to leave him something,'” Bradford said. “So I left him a pie on his doorstep, and a note.”
Freeman, 84, is acclaimed for his work in movies indlueint “The Shawshank Redemption,” “Million Dollar Baby,” “Seven,” “Invictus,” and “Driving Miss Daisy.”

Bradford’s note, which included her address, said, “Morgan, welcome to the neighborhood. Love your neighbor Lauren.”

The pie was gone when she drove by the next day.

On Christmas Eve, she said, the doorbell rang.

“I opened the door, and no one was there, but I looked down, and there’s this huge jar with a giant bow on it and a card. It said, ‘Lauren, thank you for my pie on Thanksgiving. Here’s a jar of honey from my Mississippi honeybee farm. Love, Morgan.'”

Freeman’s publicist confirmed the episode in an email, the newspaper reported.

“It was a cool experience. I mean, he’s Morgan Freeman and he took the time to bring me honey from his honeybee farm and leave it on my doorstep with a handwritten note,” Bradford said.

“Who does that? I thought that was really down to earth, and it was just a cool thing.”