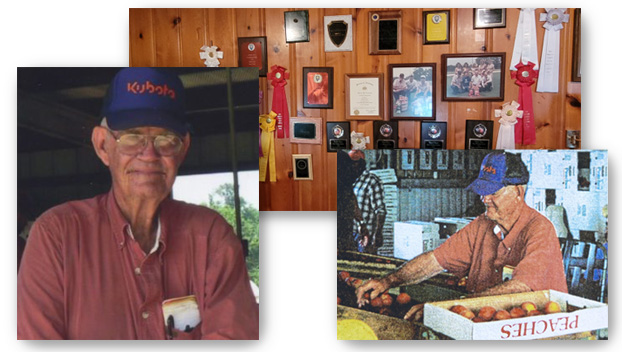 He was the oldest peach farmed in Chilton County at the age of 90.

He passed away on June 13, and funeral services were held on June 16.

“His daddy, A.C. Patterson, had some peaches and that was just what he (Billy) decided that he was going to do,” Peggy Smith, one of his daughters, said.

His motto for his peaches was “grown with pride, sold with honor.”

“He treated people the way he wanted to be treated — fair and honest,” Smith said.

He liked to grow a variety of peaches and saw many changes in the industry.

Betty Mims, one of Billy Patterson’s daughters, said his favorite varieties to eat were Contender and O’Henry.

The Patterson Farms in the Fairview community has been in the family for three generations with Larry Patterson running it today.

Johnny Smith, Peggy’s husband, recalled how Billy Patterson had told him that many of the other peach farmers diversified to include other crops, “but they stuck with peaches.”

Although there was a year when he grew watermelons and cantaloupes.

Smith said this may have been in a year when the peach crop had not been as good as usual.

He was one of the first peach farmers in the county to use a peach grader, a conveyer belt used to help sort peaches by size.

Having a good work ethic and teaching others to work hard and do well was important to Billy Patterson.

“He taught us all to do a good day’s work for a good day’s pay,” Mims said. “… As long as you treat people right, life is going to work out for you.”

Smith said he emphasized “you do your best and be satisfied with it,” regardless of whether anyone complimented the work.”

This was a lesson he learned from his father.

Youngest son Tommy Patterson said his father had told him a story of “when he was really young … he was plowing a field with mules and all his friends were going fishing and he wanted to go fishing but he had to plow the field, and he was doing it but he didn’t want to do it.”

“My granddad came out there and he said, ‘Billy, are you enjoying what you’re doing?’ and he said, ‘To be honest, no not really I want to got fishing.’” Tommy Patterson recounted. “(Billy’s father) said, ‘I can tell … the work that you are doing is not that good.”

This incident solidified for Billy Patterson the importance of doing his best.

“He was my father, but he was best friend,” Mack Patterson said “He was my hero.”

Mack Patterson said they worked a lot together, and trips to other places created special memories.

“Those were special,” he said. “I will never forget that … When your Dad passes, everything becomes special.”

During the summers when Billy Patterson was running Patterson Farms, he would hire high school students.

“At one point in time, we had almost the whole football team working out there,” Tommy Patterson said.

Mims said one of these high school boys (now grown) told her at her father’s viewing that working in the summer for Patterson Farms is where he learned how to work.

Smith said caring for the peaches was a year-round job.

“He loved to see the grandkids and the great-grandkids playing and they (her parents) would keep up with them,” Mims said. “He would always make the girls feel like little princesses and the boys played ball … he and momma (Dean) both loved watching them run around and play.”

Mims recalled how Billy Patterson would be “mischievous at times” with the grandchildren, particularly around Easter. He would always have one egg hidden in his pocket during the annual egg hunt.