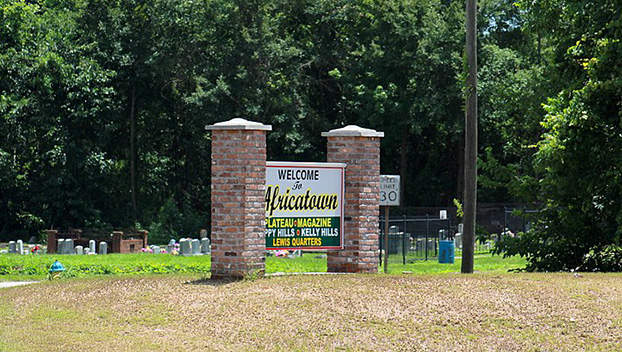 Descendants of the white Alabama businessman who financed the voyage of the last slave ship to land in the United States more than 160 years ago have agreed to sell a building that will become a hub for Africatown USA, the community settled by the freed Africans after the Civil War.

A long-closed credit union building owned by relatives of Timothy Meaher will open within weeks as a food bank and as home of the Africatown Redevelopment Corp., officials told a news conference Thursday. The family sold the brick building to the city for $50,000, well below its appraised value of $300,000.

The family, which tax records show owns millions of dollars worth of land around Mobile, issued a statement that described selling the building as a way “to give back to the community.”

“We all look forward to watching this endeavor become a reality with a lasting positive impact on the community for years to come,” it said.

Mayor Sandy Stimpson said he contacted a representative of the family about acquiring the property in Africatown, located just a few miles north of downtown Mobile. Large parts of the once-vibrant community are blighted, but the area has received new attention since the wreckage of the slave ship, Clotilda, was found in 2018.

Community leaders are now trying to revitalize the area with a museum and other attractions that could bring visitors and an infusion of money into the area. A leader of the effort, Africatown resident and former New York Mets great Cleon Jones said he has hope for the future.

“Most people in Africatown will say it has taken years. Some would say it has taken centuries to get where we are today, but the blessing of it all is that progress is being made in a way that I never expected to see in the last three or four years,” he said.

Financed by Meaher on a bet, the Clotilda arrived in Mobile in 1860 with about 110 African captives and was quickly burned and scuttled in delta waters north of Mobile Bay. Unable to return home to Africa after the war ended in 1865, about 30 of the Africans used money earned working in fields, homes and vessels to buy land from the Meaher family and form Africatown USA.

While Stimpson praised the Meaher family for selling the building at a discounted price, none of its members attended the announcement. Descendants of the Clotilda captives, many of whom still live in the area, say Meaher descendants haven’t spoken with them since the ship was discovered.

Darron Patterson, president of the Clotilda Descendants Association, said members want to talk with the Meahers about topics including additional land the family owns in Africatown.

“The Meaher family is as big of a part of this story as anyone,” he said.

State lawmakers approved formation of the Africatown Redevelopment Corp., and the city used federal pandemic relief money obtained through the state to purchase the building. The food bank will operate as a partnership between community groups, the city and county, officials said.