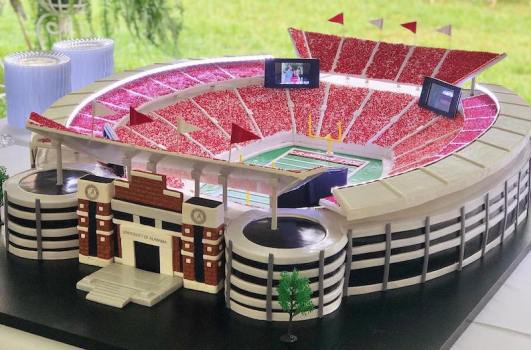 Barb Sullivan describes herself as a “sugar artist” which was readily apparent upon viewing her latest masterpiece: a large cake replica of Bryant-Denny stadium.

Sullivan specializes in custom cake designs and spends a lot of time working to create extravagant works of art out of the commercial kitchen that she operates in her own home.

“It’s bigger than just baking,” Sullivan said. “There is so much engineering and architecture work that we have to put in to make these cakes have that ‘wow’ factor. When we go into the design process we will have to come up with a pattern and a basic blueprint of our project to figure out how we are going to replicate it into the cake.”

This particular piece featured red velvet cake, with a lot of that engineering that Sullivan mentioned employed to make the cake complete with lights on the upper deck and jumbotron screens that featured scrolling photos of the bride and groom.

“We had working lights on it,” said Cliff Sullivan, Barb’s husband. “That gets tricky because you can’t have inedible stuff on the edible part. You can’t just stick batteries in cakes. The jumbotrons had scrolling pictures which added an extra layer of aesthetic. We have done this on several cakes before.

Sullivan employs help from her husband Cliff, and her team members that she fondly refers to as her “Team Buttercream.”

“We had 5 people and I assigned each person their part of the structure to focus on and help figure out,” Sullivan said. “Each of my team members have skills in particular areas. I have to figure out who can do what and help me figure out. I have a wonderful team and I am so blessed to have it. Most of them have other jobs and like working for me on the side. Even though it can be very challenging and can be frustrating and challenging it is so fulfilling.”

At the end of the project, Sullivan said it took her and her team 130-man hours combined. It takes several pounds of fondant, cake batter and 12 sheet cakes to stack together and start carving.

The result was a 3.5-foot by 4-foot cake that was 90 percent edible, despite looking as if it was not food at all.

Sullivan is no stranger to these types of jobs as she has developed a reputation as a go-to artist for feats of sugar art like this. She has dedicated herself to mastering this craft which has appropriately placed her in front of the likes of Nick Saban in the past.

Sullivan has made this her life’s work which has led her to creating close to 300 wedding cakes a year. For her this is bigger than just making something sweet for guests at a wedding to enjoy. It is about creating something that her clients and everyone who gets a chance to see it will remember.

“I love doing this,” Sullivan said. “It is a family business and we feel very blessed. These cakes are usually for happy times and celebrations which makes it better. We are always up for a good challenge.”