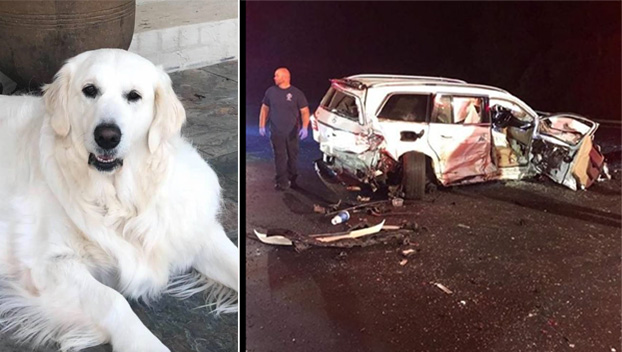 The dog that captured the hearts across the state of Alabama and beyond has been found safe.

More than 800 people were following the search of  the  golden retriever Cleo, who went missing after a freak accident in Georgiana, Alabama.

Below is the original story abut Cleo’s disappearance by The Greenville Advocate:

The journey began when the family of four left Tuscaloosa headed to Destin. In a freak accident, a car from the other lane crossed the center line. Ryan Shirley, driving, tried to avoid a head on collision by swerving, resulting in a collision on the passenger side of the vehicle. A U-haul then struck the Shirley’s vehicle from behind shattering the rear window that a terrified Cleo then jumped out of.

The report form the Georgiana Police Department was inaccurate when detailing the injuries of the victims that was previously reported. Karen Shirley was in the passenger seat of the family’s vehicle and sustained several injuries. The jaws of life were used to extract her from the vehicle. Once extracted, she was transported to UAB hospital for severe injuries and surgery,

Their daughter Savannah was in the car as well.

As Shirley recovers from her injuries, Ryan, Savannah, and countless family and friends have searched for Cleo. The family said she has a tag that looks like a driver’s license and she is microchipped.

Some people have claimed to see the golden retriever in the area but there have been no pictures or confirmation that it was Cleo they saw.

The family has set up a Facebook page in hopes of locating their four-legged family member. The page has exploded in popularity.

Savannah left the following message for everyone searching for Cleo: “Hello everyone, my name is Savannah Shirley, daughter of Ryan and Karen Shirley and the owner of Cleo. As most of you know, we got in a horrible accident Friday night on a highway in Georgiana, Alabama and our poor pup jumped out of the shattered back window and fled into the woods. We are so grateful for all of the kind, selfless people who are giving all their time and effort to help us get our family back together. It means more to us than you know. Please pray that God is protecting our sweet Cleo out there and that we are reunited soon! Attached are some pictures of her, she’s about 90 pounds (chunky girl, we know!) and she has a bubblegum pinkish colored collar with multicolored sprinkles all over it and attached to it is a little replica Alabama license tag with her information on it. Thank you all so much.”

“I drove down last night to Georgiana to look for Cleo! If you want to know what this country is made of go to Georgiana, Alabama knock on a few doors and ask if they have seen your dog, there you will see real heart in the country,” Ryan Shirley said.  I want to thank Frank the mayor and his family who helped us tirelessly until early hours of the morning! Also, police and first responders were awesome, we hope Cleo will be found and want to thank everyone from all walks of life. Thank you all Ryan Shirley family

Molly Fielding, a family friend from Destin, provided the updated information on the family. She is asking if anyone has a drone or a tracking dog that might be able to help search for Cleo to please contact them.

Fate of Alabama company’s planned mine near Okefenokee Swamp…