Ryan Morrison makes a living as a bagpiper…in Alabama 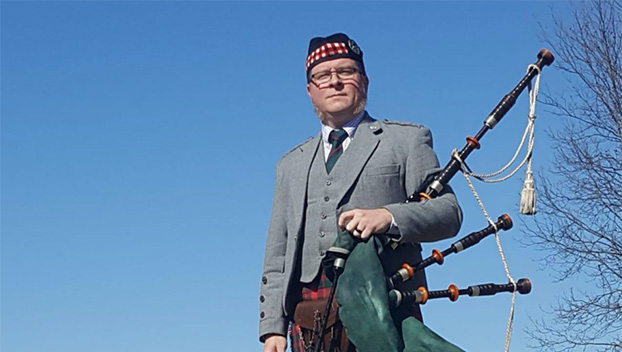 Before Google, YouTube and Facebook, Ryan Morrison was a Birmingham teenager – a self-described “punk rock kid playing guitar” – who became somewhat obsessed with his Scottish heritage and decided he wanted to learn to play the bagpipe.

Since it was impossible to learn on his own, he spent a year searching for a teacher and finally found one in the late John Richardson, whose house smelled of tobacco smoke and was full of tartan plaid.

Ryan was hooked. “I fell deeply in love with the culture and music, as full-immersion as I possibly could here in Alabama,” he says.

His maternal grandfather had rediscovered the family’s Scottish roots when he was stationed in Scotland during World War II. The Morrison clan had long since settled in North Carolina, and Ryan’s great-grandfather had made his way to Birmingham. “Nobody from those generations had memories of the old country, but we had the understanding that we were from Scotland,” Ryan says.

In high school, Ryan became enamored of British and Irish literature. His mom reminded him of his heritage. “You’re from this stuff,” he remembers her telling him.

He decided it would be fun to surprise his grandfather, then a NASA engineer in Florida, by learning to play the bagpipe. “He was absolutely delighted,” Ryan says.

The bagpipe is a challenging instrument that takes years to master. “It’s so very hard to learn,” he says, adding that he didn’t feel competent until he had played for a decade.

Still, about six months into his lessons, he joined the Heritage Pipes and Drums band. “I jumped straight in there,” he says. “Now I know how exciting it is to get a young person interested. They were thrilled to have someone 30 years their junior.”
Ryan was appointed pipe major of the band, now called Ian Sturrock Memorial Pipe Band, in 2000.

He’s also a member of Jasper Coal, a Celtic folk punk band he describes as being “like the Alabama Dropkick Murphys.”

For the past 15 years, Ryan has worked full-time as a professional bagpiper. “This is literally how I pay my bills and put food on the table,” he says. He now owns eight kilts, treating himself to a new one every few years on his birthday.

Ryan owes his career, which he calls “a dream come true,” to his wife, Sherry. After he graduated from the University of Alabama at Birmingham, where he earned an honors degree in philosophy, he had intended to go into public policy work but “got disenchanted with the public policy world,” he says. He ended up working at a frame shop.

Meanwhile, Sherry’s job enabled her to support them both, so she encouraged him to take a year to get himself established and try to make a living playing his bagpipe. Sure enough, “I started becoming the go-to guy,” he says.

In addition to making music in bands, Ryan’s career includes teaching and performing at events, where the distinct, ancient sound of his instrument is usually a highlight. During the week, he gives bagpipe lessons to students who range from their early 20s to mid-60s. He has one student who drives an hour to learn how to play.

And his weekends are busy performing at weddings and funerals, where the lone bagpipe never fails to give listeners chills. “Amazing Grace” is the hymn he plays the most. He says he’s often requested to play music from “Braveheart.” Unfortunately, though, the soundtrack was recorded with uilleann (Irish) pipes that are “so different from Highland pipes,” he says. “It’s not for lack of desire, but I can’t do it.”

He can play the Auburn fight song, another popular request, but he can’t do Alabama’s. “The Alabama one has too many notes. It just can’t be arranged,” he says.

Ryan is on call 24 hours a day, seven days a week for funerals, and 2020 was a busy year for those. “Last year, the most sobering experience of my life was how much my funeral bookings picked up,” he says. “I had twice as many in the first half of the year as I did the previous year.”

He even experienced a traffic jam at one cemetery where there were three funerals going on at once. While he usually has one wedding every weekend or so, last year he only booked two wedding ceremonies. “It’s been a heck of a year,” he says, due to the pandemic.

But the Birmingham Bagpiper, as he bills himself, is certainly not complaining. “All I want to do is play my bagpipe,” he says. “My practice chanter is in my hands eight to 10 hours a day.”