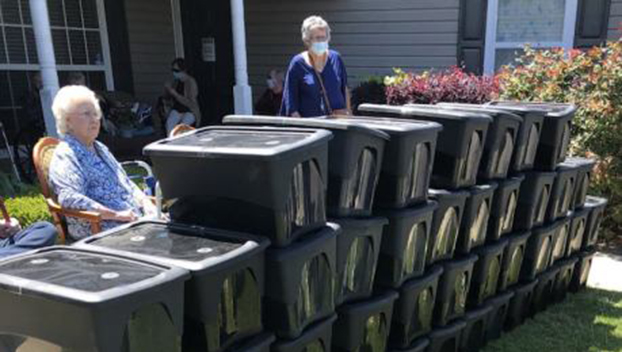 A group of seniors at an Alabama retirement community were surprised when large more than a dozen large black bins were rolled up to the front of their facility Friday.

The residents living at the Gardens of Pelham were surprised on Friday, May 7 when representatives from Old Time Pottery showed up with the gifts, all donated from customers.

These bins were assembled through Old Time Pottery’s “Big-Hearted Bins” program, which asked its customers to donate items or money at the register to fill the bins which then goes on to seniors.

Old Time Pottery runs this program throughout the company to help assist the senior community in each area in some way. According to Old Time Pottery’s Manager Brad Ehlman, their location had one of the largest shows of support for any of the stores.

“When COVID hit last year, we wanted to do something for our seniors,” Ehlman said. “They have really have had it the hardest over the past year. They could not get out and see their families, or leave and do things outside. The community really came together by donating money at the registers to help fund this program. More than half of our customers donated each time they went to check out. It was really an overwhelming show of support.”

Once the drive part of the program was over, they packed up the bins and brought them to the Gardens of Pelham for a donation ceremony with city leaders, community members, residents and staff from the facility in attendance.

“The residents had a chance to come outside for the presentation, and it was fabulous,” said Gardens Administrator Mary Kneff. “They were so into it and it touched each and every single one of their hearts. It has been such a tough year for them and it is still tough. We try and provide as much care as we can for them, but getting something like this is very special for them. Mayor Gary Waters stuck around and talked with them, and they really loved that.”

Residents watched on with big smiles and bright faces as the dozens of bins were unloaded and presented to the facility. Ehlman said that he could tell they were very excited about them.

“It was a thrill seeing their faces,” he explained. “For almost this entire past year they could not get out and see their families. So to give them a chance to come outside, you could tell that they were so appreciative of us being there to do that for them.”

Kneff and Ehlman both said that this would not have been possible without the overwhelming support of the community. They expressed that Pelham’s dedication to its seniors is unlike anything they have seen in other cities.