Forecasters: Damaging storms to plow through state, southern US into Tuesday night 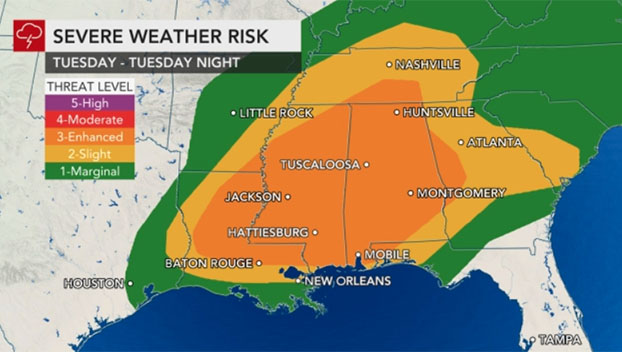 AccuWeather forecasters warn that yet another wave of severe weather is expected to strike storm-weary areas of the United States. The threat zone will cover an area of more than 1,000 miles from the lower Mississippi Valley and Southeast to the upper Ohio Valley into Tuesday night — and storms in these areas will be capable of producing more tornadoes.

Tornado-ravaged Mississippi will lie within the heart of the severe weather risk area, along with the major metro areas of New Orleans, Nashville and Atlanta.

Humid air surging northward will collide with an approaching storm system and result in another outbreak of thunderstorms that will likely linger well into Tuesday night, according to AccuWeather Senior Meteorologist Brett Anderson.

The thunderstorms are expected to target cities such as Baton Rouge; Jackson; Birmingham and Montgomery, Alabama; Charlotte, North Carolina; Columbia, South Carolina; and potentially more northern areas as well such as Charleston, West Virginia, and Pittsburgh.

Damaging, straight-line winds could reach an AccuWeather Local StormMax™ of 80 mph, especially if an intense line of thunderstorms known as a squall line develops.

Experts are urging residents to make sure they have a way to receive severe weather warnings before heading to bed with the risk of severe weather expected to continue well after dark.

“There will also be pockets of flash flooding, especially in low-lying and poor drainage areas, but fortunately the storms will be moving along at a decent clip, which will limit the duration of intense rainfall for most areas,” Anderson said.

Areas of the South that experienced a very wet month of April and beginning to May will be at the greatest risk of experiencing flash flooding issues.

Even without any flooding issues, the torrential downpours within the storms can lead to problems for motorists in the form of reduced visibility on the interstates as well as an increased risk of hydroplaning. Stretches of interstates 10, 20, 40, 55, 65, 75 and 85 will be impacted by such hazards.

AccuWeather meteorologists say that it’s possible for locally heavy and gusty storms to occur across the mid-Atlantic as well later Tuesday, similar to what occurred during the beginning of the week. On Monday, tornado-warned storms left behind a trail of damage reports across portions of eastern West Virginia, northern Virginia and northern Maryland.

For the most part, however, wet weather in these areas and farther north into New England will be beneficial in easing pockets of unusual dryness.

The risk for severe thunderstorms is expected to wane significantly at the middle of the week, as the overall storm system begins to move offshore.

Still, there may be just enough sunshine and daytime heating prior to the storm’s exit to ignite heavy, gusty and locally damaging storms from near the Delmarva Peninsula to the Carolinas, southern Georgia, the Florida Panhandle and along the central Gulf Coast.