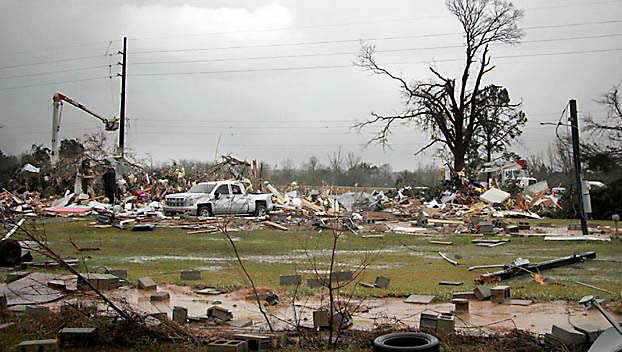 You could call the Rev. Louis Johnson the pastor of disaster.

In fact, he’s working on his Ph.D. at New Orleans Baptist Theological Seminary, and he’s planning to write his dissertation on church emergency preparedness.

He’s had plenty of first-hand experience.

When Johnson was a teenager, his home church, Lakeside Baptist, was flooded with eight feet of water in 1994 when Tropical Storm Gordon stalled over Albany, Ga. “That was my first experience with natural disaster,” Johnson said.

Since last summer, he’s been pastor of Fairhope Avenue Baptist Church in Loxley. In September, Hurricane Sally destroyed two buildings on the church campus and wrought havoc throughout the region.

But by far his biggest challenge was the Tuscaloosa tornado of April 27, 2011.

Two months after he became the pastor of Rosedale Baptist Church in Tuscaloosa, his first pulpit, a tornado ripped through the city and demolished the neighborhood surrounding the church. That put him in charge of emergency relief operations.

“In Tuscaloosa, there was a lot of total obliteration,” Johnson said.

Johnson, then the bi-vocational pastor, was working at the Lifeway Christian Store on McFarland Boulevard the day of the tornado.

He remembers what a beautiful day it was – before the tornado hit.

“The skies were just about crystal clear,” he said. “Hours later, we were huddled under a desk.”

After the tornado blew through Tuscaloosa, he tried to make his way to the church.

“There was a power line down across the road,” Johnson said. “You couldn’t get through. I went to the last car in line and said, ‘You’re going to have to back up.’ A woman was driving, and she was in tears. She had a bloody blanket in her lap. There was an infant wrapped in that blanket. She said, ‘I’ve got to get to the hospital.’ I said, ‘You can’t get to the hospital. There’s a live electrical line down the road.’ Everyone was in an absolute state of shock. It looked like a battlefield.”

When he finally made it over to Rosedale Baptist Church, the scene was apocalyptic.

“The roof was peeling off our sanctuary,” he said. “Our education building had the windows blown out and the sanctuary was turned on its foundation. It was amazing how two buildings 12 feet apart, one could be destroyed and the other still standing.”

It was the whims of the tornado that left enough of a building for Rosedale Baptist to serve as an emergency center.

The nearby Rosedale housing community was essentially demolished. “It was just a field of bricks and rubble,” he said.

People asked him to help find their relatives. “I said, ‘I don’t know where your loved ones are, but I do know one thing, and that is God is present.’”

“The police set up search and rescue and used our building as a headquarters,” Johnson said. “They had the dogs out to sniff through the rubble. They were out there all night long. The cell towers were jammed up or destroyed. You couldn’t get a call out or a text out.”

With no power, no lights, it was a dark night of panic.

“We met at the church at 7 a.m. the next morning and began to see the scope of the damage,” Johnson said. “The people were coming back out digging through the rubble of their homes, trying to find what they could. They were looking for any fabric of their lives that had survived the storm.”

The situation became more urgent. “It got to middle of the day and there were no utilities,” he said. “There was no food or water.”

“We started serving food and giving everybody something to eat and drink,” Johnson said. “Our primary concern was food, water and toiletries.”

When the Federal Emergency Management Agency arrived, Johnson feared the church would be shut down.

“FEMA was going around and shutting down church efforts,” Johnson said.

But something amazing had happened at Rosedale Baptist. It became an indispensable relief hub.

“On one side of the building, people were dropping off donations,” he said. “People were sorting. Runners were running. Classrooms were used to sort. On the other side, people were coming and asking for help. It was very effective and efficient.”

A FEMA official toured the operation.

“They saw what we were doing and gave us pointers,” Johnson said. “I walked her through the process, showing her everything. She said, ‘You’re doing such a good job here. What you’re doing, keep doing. Can you commit to doing this for the next three weeks?’”

For the next three weeks, staff and volunteers worked non-stop.

“What we were able to do at Rosedale, setting up that efficient distribution system, that was an inspiration from God,” Johnson said. “FEMA had to shut down places that were ineffective because of safety issues.”

Three weeks into the relief effort, FEMA set up its own operation and the church closed its relief center.

“It was so welcome when they came and said we could wrap things up,” Johnson said. “We were just used up and burned out.”

It would have been hard for the church to go much longer, he said.

“It wasn’t just physically grueling, it was emotionally and mentally grueling as well,” Johnson said. “To look out at what used to be homes and see people sifting through that looking for anything they can find, that was bad. We were physically feeding people’s stomachs, but we wanted to spiritually feed them too.”

The church stood along the edge of the tornado’s path.

“There was that mile-wide swath,” Johnson said. “When you entered the disaster zone, the destruction was total and complete.”

In Tuscaloosa a decade ago, “We had a plan, but it had to be adjusted every day,” he said.

One of the biggest problems was people wanting to donate old clothes. For people who have had their homes destroyed, that’s not their biggest need, Johnson said. They were wearing clothes when the tornado hit and they didn’t have closets to put more clothes in.

“They didn’t have anywhere to put it or keep it,” he said. “They needed food or water more than anything.”

The tornado hit on Wednesday and on Sunday morning, the church organized an outdoor worship service and got the word out to the community.

The church sanctuary was structurally unsound and didn’t have a roof, so the church used its field adjoining Greensboro Avenue, after a cleaning crew cleared it of rubble and scrap metal blown onto it from a nearby recycling center.

“As bad as it is, we needed to take a moment to rest,” Johnson said. “We need to thank God. We need to stop and praise him. We went out in the community saying, ‘Take a break. Worship service out by the street. We just want to pray with you, make sure you’re taken care of, spiritually and physically.’ We had a devotional from Psalm 23, fed everybody. Everybody was able to stop digging through what was left of their homes and take a rest.”

Rosedale Baptist tried to send a message to the people of Tuscaloosa in their time of need, he said.

“We’re all in this thing together,” Johnson said. “You’ve got a need. We’re equipped to meet it. That’s what we do in the name of Jesus.”

Johnson said he has now seen more than his share of flooded homes, and flattened homes, surrounded by trees that were twisted and snapped off.

“Natural disasters are occurring somewhere in the globe every day,” Johnson said.

“Churches for the most part aren’t prepared. We’re on the coast. We’re a target for a hurricane.

Churches here are no more prepared there than anywhere else. I see that as an opportunity.”

“Have a plan and be prepared,” Johnson said. “Be equipped to take care of our communities.”

Woman, children found dead in car had been shot…