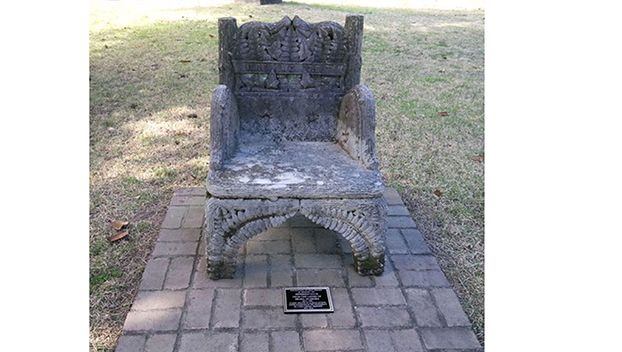 It’s not the first Confederate monument to go missing in Selma, Alabama, but the story of the stolen Jefferson Davis chair may be the oddest.

How to steal a chair that weighed maybe 500 pounds (225 kilograms)? Who was the group “White Lies Matter” that appeared to have stolen the chair to make a statement about how we remember the Confederacy? What of the ransom demand that didn’t ask for money, but included threats of a scatological nature? And how did the chair end up 300 miles (480 kilometers) away in New Orleans?

It all started at the nearly 200-year-old Live Oak Cemetery in the city known for its civil rights history. Marchers demonstrating for voting rights were brutally beaten by authorities as they tried to cross Selma’s Edmund Pettus Bridge on March 7, 1965, in an event known as Bloody Sunday.

On March 20, the Selma chapter of the United Daughters of the Confederacy reported to police that the carved limestone monument shaped like a chair and honoring Confederate President Jefferson Davis was gone. They put the chair’s value at $500,000.

That figure alone got people talking in Selma.

“I want to see what kind of chair was worth a half-million dollars,” said Robert Moore, who came to the cemetery to look at the site and walk his dogs.

The chair is one of several monuments that sit in the circle owned and maintained by the United Daughters of the Confederacy; the group also tends to the surrounding graves of unknown Confederate soldiers. It was UDC chapters across the country that helped erect Confederate memorials in the wake of the Civil War and often fight to keep them where they are.

The Confederate group put an ad in the local paper seeking the chair’s return. Then things got weird.

Someone sent an email signed “White Lies Matter” to news outlets claiming responsibility and saying the chair would be returned only if the UDC agreed to display a banner at their Virginia headquarters bearing a quote from a Black Liberation Army activist. If they did not, the chair would be turned into a toilet.

The group portrayed the chair’s theft as a way to highlight America’s slave-owning past.

“America’s original sin is that people were kidnapped from their homes and forced to build one of the most prosperous nations in the world, without being allowed to participate in it. And then we had to fight a war to end the practice. We decided, in the spirit of such ignominious traditions, to kidnap a chair instead,” read one of the group’s notes.

The next email included photos of someone wearing military garb posing on a chair that looked like the missing one with a hole in the seat resembling a potty. A final email said that chair was a fake and the real chair was being returned unscathed.

Then, miles away in New Orleans, the chair was found and three people arrested.

Pat Godwin, who heads the UDC’s Selma Chapter, is adamant that whoever stole the chair are not “folk heroes.”

“I hope there is some remnant left of civilization left in this country,” she said. “No one has any common sense. The rule of law is gone with the wind.”

The theft comes as Confederate statues and other artifacts of that era are being removed, by vote or by crowd, around the country as part of a reckoning with the country’s slave-owning history.

In this case, police found the chair April 9 near a railroad overpass in New Orleans. Resident Donald Oliver had gotten up early to walk his dogs and saw the commotion as police gathered.

“The first thing I thought — grave robbers,” he said. When police loaded it into a truck he recognized that it was an ornamental chair. He heard it was connected to Jefferson Davis but it was not until later that he learned it came all the way from Alabama.

“And it winds up in the 9th Ward of New Orleans. That’s crazy,” he said shaking his head.

White Lies Matter said they told police and the UDC where the chair could be found. Court documents suggest someone with knowledge of the theft tipped off authorities to information that helped them make arrests.

According to court documents, New Orleans police first learned of the case April 6 when the sheriff’s office in Selma put them in touch with someone who said they’d been in contact with a tipster. That tipster said the chair was being held at Tough Love Tattoos in New Orleans. Authorities went to the tattoo parlor and didn’t find it but determined the chair had been there because the walls matched the walls in a photo provided through the tipster.

Police got footage from a security camera outside the tattoo parlor. Through that, they say they identified three of six people putting the chair into a van as Stanley Pate, Kathryn Diionno, and Jason Warnick and arrested them on charges of possessing stolen property. According to an affidavit, Warnick told police he and Diionno, his girlfriend, owned the tattoo business. In Selma, the district attorney said he anticipates charging the trio with theft and extortion.

Pate declined to comment on the case through his lawyer. An attorney speaking for Diionno and Warnick said they had nothing to do with the theft and called it a misunderstanding.

The UDC has the chair back, but the group is unsure what to do with it.

“We are just going to have to deliberate on that,” Godwin said.

In Selma, some people were curious about the theft or annoyed about the attention it brought. Sitting at the foot of the Edmund Pettus Bridge that two of his uncles marched across on Bloody Sunday, Columbus Mitchell speculated that whoever took the chair might have been fighting “for the cause” in their own way. But he questioned the effectiveness.

“I think at the end of the day, they may have given it more attention than it deserved by moving it,” he said.