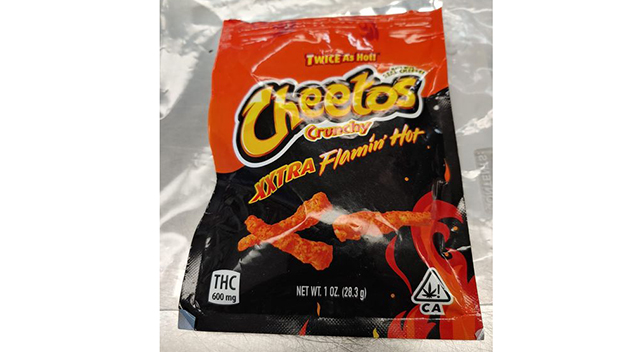 An Alabama police department is warning parents that snack foods laced with the main psychoactive compound found in cannabis have been discovered in the area.

The Luverne Police Department issued the warning to parents regarding snack foods containing the compound THC.

They have been seen in Flamin Hot Cheetos, Lays, gummy worms and gummy bears that have been packaged in similar packaging as the well-known, name brand snack foods.

“We just wanted to bring this to the attention of parents so they can be diligent,” said Captain Mason Adcock, Luverne Police Department. “These items are legal in other states but not in Alabama.”

The bags have been marked that they do in fact contain 600 mgs of THC.

According to LiveScience, THC (the active ingredient found in marijuana) stimulates cells in the brain to release dopamine, creating euphoria, according to NIDA. It also interferes with how information is processed in the hippocampus, which is part of the brain responsible for forming new memories. THC can induce hallucinations, change thinking and cause delusions. On average, the effects last about two hours, and kick in 10 to 30 minutes after ingestion. Psychomotor impairment may continue after the perceived high has stopped, however.