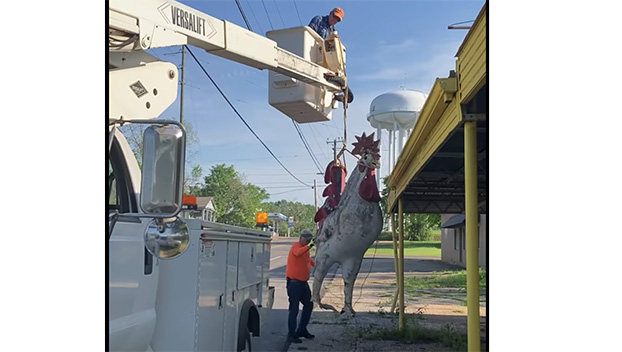 An ornamental chicken that’s been a local landmark in the southern Alabama town of Greenville has been removed from its familiar perch, and folks around town are putting in their bids to see who gets to keep the big bird.

But the chicken fell over on its side in a storm last fall, and after the church bought the building earlier this year, its leaders decided to put the chicken up for auction, with the money going toward the church’s community ministries.

“We had people in the community – church members and others – who said, ‘I want the chicken,'” Leanne Lincoln, the church administrator at Southside Baptist Church, said. “I had so many people saying that we came up with the idea of, ‘Let’s have an auction for it and see what interest we could get.’

“We thought we would just make a fun thing out of it and have some donations come in for our ministries.”

The church announced the auction on its Facebook page on April 11 and followed up a couple of days later with a video of the chicken being removed from its rooftop perch.

“I hate to see it go!” one commenter posted on Facebook.

“I can’t wait to see where this chicken will be ‘roosting’ in May!” another said.

“Each person has their own story of why they want it,” Lincoln said. “That’s another thing I’m working on — reaching out to some of those who have expressed interest to see, ‘Why does it mean so much to you? Why are you interested in placing this bid?'”

The starting bid is $1,000, and the church will accept bids until noon on April 22. The winning bid will be announced at church on Sunday, April 25, Lincoln said.

Bids need to include a name, phone number and bid amount, and they must be submitted in a sealed envelope labeled “Chicken Silent Auction Bid.”

For people who grew up in Greenville, the chicken – and specifically, the building upon which it was perched – has a special meaning.

“It’s been like a little landmark,” Lincoln said, adding that townspeople often used the big chicken as a point of reference when giving directions around Greenville. “(They would say), ‘We’re down there by the building with the chicken on it.'”

Long before it was a chicken place, though, the little building on South College Street was home to the Dairy Dream, a Greenville institution that was famous for its soft-serve ice cream.

It’s where lots of lifelong memories were made.

“For years, it was one of the places that people would go to get ice cream on Sunday afternoon after church and (after) Wednesday night church,” Joey Sanders, a Greenville native who now lives in Mountain Brook, said.

“We went to First Baptist across town, and we would get in the car after church and Daddy would say, ‘I feel like we need some ice cream,'” Sanders added. “And that’s where we would end up.”

Although it no longer serves ice cream or fried chicken, the old building will soon serve a greater purpose for the members of Southside Baptist Church and, in turn, for those in the Greenville community.

The church hopes to use it as a kitchen and pantry where it can serve hot meals and distribute groceries to those in need in the Greenville area, according to Daniel Ingram, a spokesperson for the church’s Shepherd’s Table ministry.

“It would be perfect for us to use for a soup kitchen, I guess you could say,” Ingram said. “I hate using that word because we won’t do soup all the time. We’ll do other meals, as well.

The church started the Shepherd’s Table ministry in early 2020, and after the COVID-19 outbreak hit last spring, the ministry transitioned from serving hot meals to distributing bagged groceries, Ingram said.

“It’s been rocking and rolling ever since then,” he said. “We average probably 200 bags of groceries given out every other Monday night. So, there’s definitely been a need for it, and we’ve just been trying to let God lead us and go wherever He takes us.”

So, even if you have no interest in owning a 10-foot fiberglass chicken, your contributions are still welcomed, Lincoln, the Southside Baptist Church administrator, said.

“If nobody wants to bid a thousand dollars for that (chicken) and they would just like to make a donation to our community ministries, the Shepherd’s Table, we’ll take those, too,” she said.

Five more charged in ‘ritual sacrifice’ of goat at…