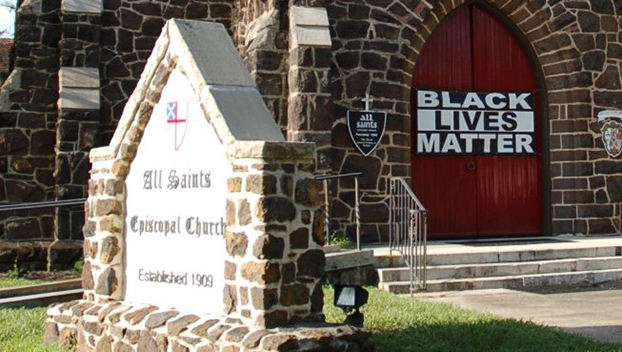 A banner proclaiming Black Lives Matter has been stolen from a southwest Alabama church.
Again.

The Rev. Jim Flowers, pastor of All Saints Episcopal Church in Mobile, tells local news outlets that the congregation decided to put up the large sign on the church doors last summer. One sign was stolen and replaced, and now its replacement has been taken as well.

Flowers said a third sign is on the way, and the church may buy more in case thieves keep returning. The church is also considering installing a security camera.

The governing board of the majority-white church voted to hang the banner after internal discussion of racism last year following the death of George Floyd in Minneapolis.

“Jesus’s ministry was to serve the people who mattered least in his world, and so our Black brothers and sisters have mattered least over the last 400 years,” Flowers said. “So we think it’s a powerful Christian message to stand in solidarity with people who have been left out, and not only left out but oppressed.”