Alabama picks up pieces in wake of deadly tornadoes 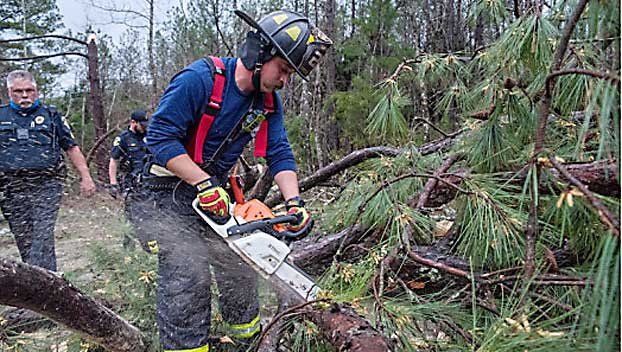 Chainsaws buzzed through fallen trees, stunned residents dug in the rubble that had been their homes, and neighbors rushed in to help on Friday after multiple tornadoes ripped a path of devastation across the Deep South. At least five people were killed.

As many as 10 tornadoes — an estimated eight in Alabama and two in Georgia — carved a tremendous path of devastation on Thursday, uprooting 100-year-old trees, stripping roofs from houses, seriously damaging schools and businesses, and scattering treasured family possessions far and wide.

All of the twisters were spawned by “supercell” thunderstorms, said John De Block, a meteorologist with the National Weather Service in Birmingham.

In the western Georgia town of Newnan on Friday, among several communities west of Atlanta walloped by the storms, the smell of pine and the whir of electric saws filled the neighborhood as volunteers lugging their own tools helped carve up fallen trees.

Charlene Watson’s apartment building was ripped apart by the tornado. She awoke to sirens and moved as quickly as she could to the basement of her building before the twister tore the roof off her building. Her son, Shawn Menard, waded through the debris, collecting the crosses that had lined Watson’s bedroom wall before it was ripped off and any other family mementos that could be salvaged.

“Just be thankful for everything you’ve got, because you are not promised the next day. Nothing is,” Watson said, holding back tears.

One person died overnight of a medical emergency, said Deputy Chief of Police Mark Cooper, although it wasn’t immediately clear if the death was connected to the tornado. The person’s name was not released as officials tried to notify family members. The Red Cross was trying to find hotels for 15 people who had fled to emergency shelters.

In Alabama, one of the twisters, which formed in the southwestern part of the state, carved up ground for more than an hour and traveled about 100 miles (160 kilometers), causing heavy damage in the city of Centreville, south of Tuscaloosa.

De Block said the tornado dissipated in Shelby County, where another twister had already heavily damaged homes and businesses and devastated the landscape. The county is home to suburban Birmingham cities such as Pelham and Helena and the unincorporated subdivision of Eagle Point — all of which suffered heavy damage.

Larry and Mary Rose DeArman sheltered in a basement closet as the tornado slammed into their Eagle Point house, collapsing it into a pile of bricks.

Neighbors lowered ladders into the basement so that the DeArmans could climb out. They both escaped serious injuries.

All of the five confirmed storm-related deaths were in Calhoun County.

“For those families, it will never be the same,” Calhoun County Sheriff Matthew Wade said at briefing Thursday evening.

Latasha Harris-Ramos told WBRC that her mother, father and sister all died when the tornado struck their home. Latasha, who lives in Virginia, tried reaching her family, and then her brother called and told her that her sister had died and they couldn’t find her parents. She got in the car and drove down immediately.

One of the victims in the hard-hit town of Ohatchee, a small community of about 1,170 people in eastern Alabama, was Dwight Jennings’ neighbor. Geno went by J.W. and had been a rodeo bull rider in his youth. He could make anything out of wood, and loved to angle for catfish, Jennings said. The two of them had planned to go fishing this weekend. Jennings spent hours searching for Geno’s dog. The animal was found alive.

Bad weather wasn’t limited to Georgia and Alabama. Officials warned of strong thunderstorms and potential flooding across the southern U.S., including in parts of Tennessee, Kentucky and the Carolinas. Emergency responders hospitalized one person in Sumner County, Tennessee, and the Nashville Fire Department posted photos on Twitter showing downed trees, damaged homes and streets blocked by debris. Thousands of customers remained without electricity in Alabama, according to poweroutage.us.

White House press secretary Jen Psaki on Friday extended condolences to the victims. She said President Joe Biden’s administration is in close contact with state and local officials, but hasn’t received any requests for federal assistance yet.

At least three people killed as tornadoes rip across…