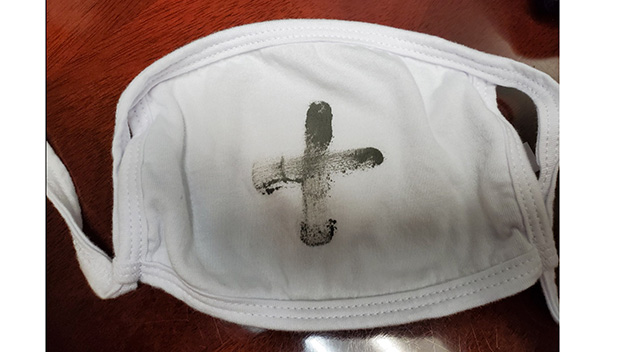 A United Methodist pastor in Alabama found an unusual way to observe Ash Wednesday, by painting the traditional cross made of ashes on face masks.

The Rev. Holly Woodall, pastor of Rogersville United Methodist Church, finger-painted a gray sign of the cross on masks.

“I painted the masks with my finger using nontoxic paint mixed with a bit of last year’s ashes,” Woodall said. “That way, they mimic the way they would look drawn on the forehead.”

Ash Wednesday marks the start of the 40-day penitential season of Lent, a time of spiritual preparation leading up to Easter on April 4.

One aspect of observance on Ash Wednesday is accepting a mark of ashes, typically in the sign of the cross on the forehead, as a sign of penitence.

This year, with COVID-19 a concern, clergy have had to re-evaluate how to administer the rite of ashes.
The ash-marked masks were distributed in advance of a video service observance for Ash Wednesday.
“During the recorded service, I had them put on the mask while I said the traditional, ‘Repent, and believe the gospel,’ Woodall said.

Snow and ice across North Alabama added another layer of difficulty.

“We couldn’t deliver them all due to weather,” Woodall said. “So, for those who didn’t get a mask yet, I had them draw the symbol on their own forehead to feel the physical connection. It ended up working and being very powerful, I think. People can get their masks later and everyone can wear them throughout Lent and the Easter season.”

Churches adopted a variety of options for observing Ash Wednesday this year.

No water, no problem: Mom uses crawfish pot for…