GOP group calls for Mo Brooks, other lawmakers to resign in wake of Capitol riot 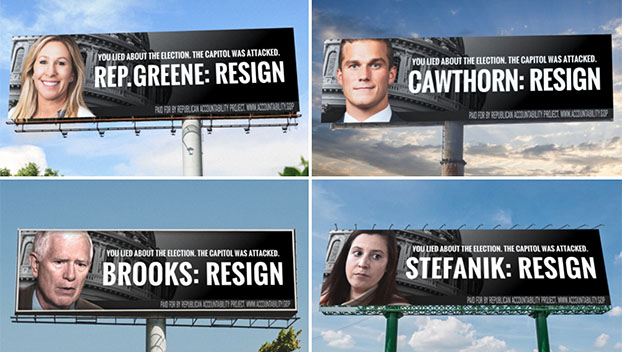 A Republican organiztion is calling for the resignations of congressional lawmakers from their own party – including Alabama’s Mo Brooks.

The Republican Accountability Project (RAP) has launched a $1 million billboard campaign calling for the resignations of Brooks and others because it says it is angry over the direction of the GOP in the aftermath of false claims the presidential election was stolen and the Capitol riot,

“The balance has turned against the responsible, reasonable wing of the Republican Party. Most Republicans in Congress abetted the insurrection on January 6 and ignored, excused, or even participated in the dog whistles to QAnon and other dangerous conspiracy theories,” the group’s website states. “Most Republicans went along with the trend because it was politically safe, but a few of them drove the trend. They actively invented and disseminated lies, misinformation, and conspiracy theories to rile up their base and advance their own careers at the expense of the country and the Constitution.”

“They have made it clear that they can never be trusted with power. To ensure that as few of them as possible return to Congress in 2022, we will recruit and support primary candidates against them through our political action committee where strategically viable.”

Brooks went on Twitter to issue his response to the billboard campaign: