In Alabama, generations of artists learn from one another 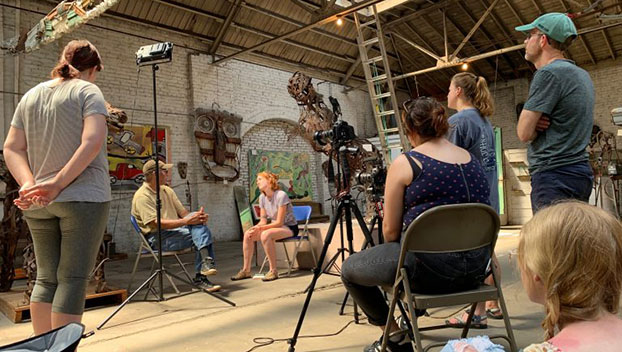 Professor Christopher Jordan did not know the Black Belt well when he decided to take his photography students into the field to document the region’s artists and crafts makers. What they found were people turning often meager material into creative masterpieces.

“We were struck by the resourcefulness of the artists,” Jordan said.

The students’ work, completed mainly last summer, became the Black Belt Artist Project, a collection of portraits and video interviews of basket makers, weavers, quilters, painters and sculptors. The photos were on exhibit through January 29 at University of Alabama and also were collected into a book created by the school’s graphic design students.

Jordan, a photographer himself, started the Black Belt Artist Project as a service learning project, which then became a summer course.

“The idea was to bring the classroom into the community, so students could have real world experience,” he said.

For the students, it was a chance to develop their skills. The students also learned from the older artists, who were often self taught.

“I think the students really benefited by speaking to older artists, mentors in their own backyard in Alabama,” he said. “And realizing there is such talent and wisdom in the region.”

The Black Belt stretches across the South, including a wide swath of Alabama. Originally named for its dark and fertile soil, the area has a large African American population that first arrived as enslaved workers.
“There has always been so much negative publicity about our region, financially but also racially,” said Kristin Law of the Black Belt Treasures Cultural Arts Center. “But if you come here and visit, you see what a beautifully rich culture and place it is.”

Black Belt Treasures, founded in 2005, is a non-profit organization that promotes the area’s artists. The most famous artists in the area are the quilters of Gee’s Bend.

“The people here are as varied as the region itself,” she said. “You have some trained artists, but a majority of the artists we work with are self taught or they learned their art out of necessity.”

Black Belt Treasures helped Jordan find artists for students to interview and photograph. Canon Solutions America supported the project and the book produced by the students.

“To have people come and sit down and talk and pick my brain about what I do, it was exciting,” said Andrew McCall. “The students were young people. I felt like I had something to contribute to their learning.”

McCall and his wife, Etta, weave thick vines into baskets and chairs. They turn reclaimed wood into angels and high-steepled churches. Art has been their career for 40 years.

“I never dreamt of being an artist,” he said. “We grew up on a farm, and my father would always say take a look around and use what you’ve got.”

Rather than self-taught, McCall says he was “God taught.”

“My concept of art is very simple. I don’t make it complicated,” he said. “I was trained in simplicity through God.”

Jordan hopes his students’ portraits will be exhibited again around the state. When COVID-19 abates and travel is again safe, he wants to take a new group of students into the Black Belt to continue the project.

“I can picture a future sunny day when we’re traveling the back roads of Alabama meeting other artists,” he said.