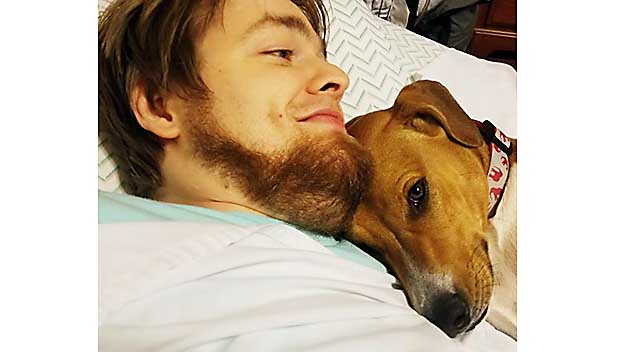 Two-by-Two Rescue dog Buddy has provided Brandon and his family a sense of joy after Brandon suffered depression as a result of a devastating injury. (Contributed)

An inspiring story that involves a dog rescued from Two-by-Two Animal Rescue in Helena and a teen searching for hope is gaining national recognition, as the story illustrates just how powerful the bond can be between a pet and its owner.

The story was revealed as part of the Petco Holiday Wishes Grant Campaign, and based on votes, this amazing story earned Two-by-Two Animal Rescue a $25,000 grant for being chosen in the top 10 out of more than 13,000 submitted adoption stories.

Now, Two-by-Two is asking for the public’s help again, as the rescue is up for an additional $25,000 grant from Petco, should the story gain enough votes for the People’s Choice Competition happening now until Dec. 20.

The inspiring story began not long after 15-year-old Brandon suffered a devastating injury during a wrestling match that caused him to be diagnosed with quadriplegia.

As a result of the diagnosis, Brandon’s life, along with his family’s, was forever changed.

“As Brandon’s parents learned to care for him, he slipped further and further into darkness and despair,” the family recalled. “His depression became a palpable presence — a seemingly never-ending pool of sorrow. Until one day Brandon decided to do the only thing he knew would end his pain. He chewed through his own cheek in an attempt to bleed to death.”

Not long after this, Brandon asked his parents if he could have a dog and that’s when Brandon crossed paths with Buddy, a dog who had been tossed away and abandoned.

Two-by-Two Animal Rescue Founder and Executive Director Sonya King recalls the bond between Brandon and Buddy and how special it became not long after the family went through the adoption process.

“When they adopted Buddy, we initially had no idea the dynamics of their family except that Brandon had a disability,” King said. “We found out later that the son struggled with depression and he asked for a dog. Buddy was a very hyperactive dog, and when he met Brandon he immediately went into caregiver mode. Buddy knows his role and it’s a spiritual bond and there’s no doubt that God orchestrated this. This was Buddy’s purpose.”

After the family brought Buddy into their home, they recalled just how much joy the dog brought to Brandon.

“I honestly can’t describe the moment Brandon met this dog who we now call ‘Buddy,’ except to say that instantaneously Buddy knew Brandon,” the family said. “I mean truly knew him — knew him emotionally, spiritually — seemed to understand that Brandon was not meant to be disabled, vulnerable. Today, Buddy brings an inexplicable joy into our house—a relieved joy because of the practical ways he helps Brandon. Yet also a contagious joy in the way he connects and communicates with Brandon.”

King said Two-by-Two rescued Buddy after he had been discarded. Buddy had actually been adopted before but was returned to the shelter. He found his forever home when Brandon’s family gave him a second chance.

“This story to us just reiterates and confirms the fact that a dog is not just a dog,” King said. “They were given to us with the breath of God in them. They have purpose, and when they find their purpose it’s a beautiful thing.”

The $25,000 grant awarded to Two-by-Two Rescue will help with medical expenses and much more, but an additional $25,000 for the People’s Choice Competition would go a long way as King emphasized they are a no-kill shelter.

“We won’t put a dog to sleep because it needs medical attention,” King said. “Whether it’s shots or surgery, we’re going to raise money to make it happen. We do give that dog a second chance at life by raising money for medical expenses.”

To read the full story of Brandon and Buddy, visit Petcofoundation.org/love-story/adopted-dog-brings-hope-teen-quadriplegia/.

To vote for Brandon and Buddy for the People’s Choice Competition, visit Petcofoundation.org/holiday-wishes-peoples-choice/?entry_id=185813521.