James Spann says rain chance for most of state on Saturday, strong storms next week 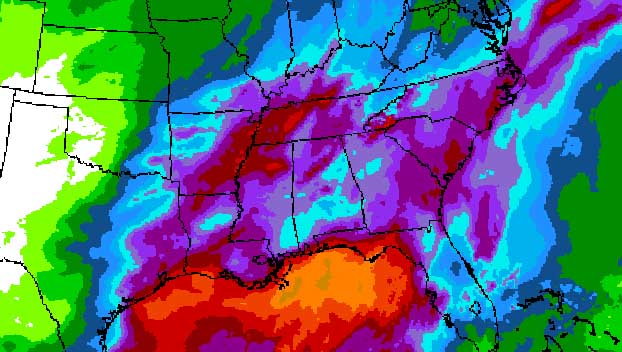 Today will be mostly sunny over the northern half of the state with a high in the low 70s. But clouds will thicken over south Alabama, with rain moving in from the south by mid to late afternoon as a tropical system approaches the Gulf Coast.

PTC 16: Potential Tropical Cyclone 16 is expected to become Tropical Storm Nestor later today; the center is forecast to move into the Florida Panhandle after midnight tonight.

James Spann has the Alabama forecast for Friday and the weekend ahead from Alabama NewsCenter on Vimeo.

Top winds are now 40 mph; tropical-storm-force winds extend outward up to 115 miles to the north and east of the possible center. There is a danger of storm surge inundation of up to 5 feet above ground level beginning today along the Florida Gulf Coast from Indian Pass to Clearwater, where a Storm Surge Warning is in effect. Residents in these areas should follow advice given by local officials.

A few short-lived, isolated tornadoes or waterspouts are possible on the Florida Gulf Coast from near Panama City Beach down to Tampa Bay and Fort Myers tonight and Saturday morning.

ANOTHER CHILLY MORNING: Here are some of the colder temperatures across Alabama at daybreak today:

ALABAMA IMPACT SATURDAY: The heaviest rain will fall over southeast Alabama, where places like Dothan and Geneva could see 1-2 inches tonight and Saturday morning. Otherwise, mostly light rain is possible over the state, mainly over the eastern counties. Some rain is possible over the western side of the state as well, but it will be light and spotty there. Otherwise, the day will be cloudy with a high between 65 and 70 degrees.

Sunday will be a dry, pleasant day with a partly sunny sky and a high in the upper 70s.

STRONG STORMS LATE MONDAY: A cold front will bring a band of showers and thunderstorms in Alabama late Monday and Monday night; those storms could be strong to severe. The Storm Prediction Center has parts of north and west Alabama in a severe weather threat.

For now it looks like the main threat will come from strong, potentially damaging straight-line winds. We will have a much better look at the situation once the tropical system passes east of here Saturday night. The middle of next week looks dry and pleasant; then another cold front brings the next chance of rain and storms Thursday night and Friday.

FOOTBALL WEATHER: For the high school games tonight, dry weather is expected over the northern half of Alabama with temperatures in the 60s. But rain is a good possibility for the southern quarter of Alabama as the tropical low approaches.

Auburn travels to Fayetteville, Arkansas, to take on the Razorbacks Saturday (kickoff at 11 a.m. Central). Showers are possible during the first half of the game. The kickoff temperature will be close to 64 degrees, rising into the upper 60s by the final whistle.

Alabama will host Tennessee Saturday night at Bryant-Denny Stadium in Tuscaloosa (kickoff at 8). The weather will be dry with a clearing sky. Temperatures will be in the mid 60s. A little light rain is possible during the day, before the game.

UAB hosts Old Dominion Saturday afternoon at Legion Field in Birmingham (kickoff at 3). The sky will be mostly cloudy, and some light rain is possible during the game. The kickoff temperature will be near 70 degrees, falling back into the upper 60s by the final whistle.

Jacksonville State hosts Southeast Missouri State Saturday (3 p.m. kickoff). The sky will be mostly cloudy; rain is possible. Temperatures will fall from near 70 at kickoff into the upper 60s by the fourth quarter.

ON THIS DATE IN 2005: Hurricane Wilma developed a tiny, well-defined eye and began intensifying rapidly, reaching Category 5 strength with a record-setting pressure of 882 millibars by Oct. 19. The rapid intensification from a tropical storm to Category 5 hurricane in 24 hours was the fastest ever recorded in the Atlantic Ocean and the second-fastest worldwide, after Super Typhoon Forrest.

James Spann has the Alabama forecast for Friday and the weekend ahead from Alabama NewsCenter on Vimeo.

Republished from the Alabama News Center.

Alabama city’s services down to ‘nearly nothing’ as employee…