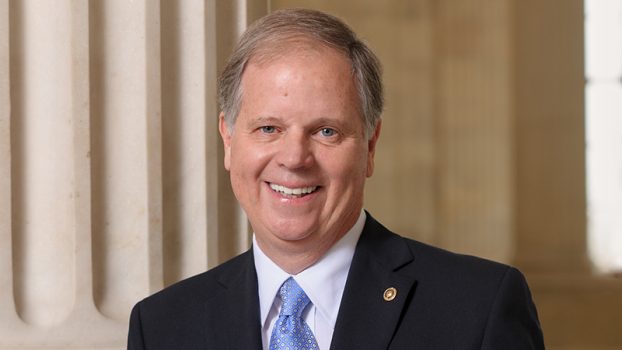 U.S. Sen. Doug Jones walked into a recent town hall and declared he was ready for whatever his constituents wanted to throw at him. But first, he wanted to address the biggest news from Washington: The House impeachment inquiry of President Donald Trump.

“I’m not making a judgment about where we are on any of this because it’s too early,” Jones said, not waiting to be asked. He noted his potential role as a juror if the issue lands in the Senate.

Already considered the Senate’s most endangered Democrat, the senator is facing the uncomfortable possibility of having to vote on removing the president from office while running for reelection in a state where Trump won 62% of the vote. Whatever Jones decides, if it comes to that, he’s going to make lots of Alabamians mad.

Just the prospect of an impeachment trial and vote is throwing partisan accelerant on a race Jones had wanted focused on safer, bipartisan economic issues.

“It’s another drum for (Republicans) to beat in a very red state,” said political scientist Glen Browder, a former Democratic congressman who was part of the moderate Blue Dog coalition.

Jones won his seat in a 2017 special election after his opponent, Roy Moore, was accused of sexual misconduct. Republicans consider his victory a one-off and have been eager to take the seat back. The key, they believe, is to make sure Alabama voters remember Jones’ party affiliation.

Republicans made clear Tuesday that they see impeachment as an opportunity.

“We are all watching and will hold him accountable if he joins his party trying to upend our constitution,” Alabama Republican Party Chairwoman Terry Lathan said Tuesday in a news conference called to needle Jones on impeachment, one of several Republicans held around the country aimed at Democrats in Trump territory. “Alabamians love President Trump and they love a fighter.”

To be sure, Jones is not alone in feeling pressure. If the Democratically led House votes to impeach Trump, forcing a trial in the Senate, a vote on whether to convict will be a moment of truth for senators from both parties. Republicans in tough races, like Cory Gardner, Susan Collins and Thom Tillis, will also be forced to make a decision certain to be viewed as picking a side.

But few of his colleagues face the hurdles that Jones does. He is the only Democrat elected to a statewide seat, winning his 2017 race by about mere 22,000 votes out of 1.3 million cast. While much of the country saw blue surges in the 2018, Democrats running statewide in Alabama topped out at about 40% of the vote.

Jones has been preparing to run as a moderate emphasizing issues that cut across party lines — health care, such as the disappearance of rural hospitals in the state, and agriculture. He’s focused on economic issues of concern to some traditional Republican voters, cautioning about how tariffs are threatening the state’s aerospace industry, automobile workers and farmers.

An impeachment trial in the Senate would make it harder to keep that focus away from the partisan warfare.

“It’s really going to suck all the air out of the room. Good luck trying to have a substantive debate on health insurance…. especially if you’re getting these televised hearings in the House or a trial in a Senate,” said David Hughes, a political scientist at Auburn University in Montgomery.

As the impeachment battle lines have been drawn, Jones has tried to cast himself as above the fray. He dismissed Republicans Tuesday for staging a “political stunt” about such a “serious” matter.

“As a U.S. senator, it is my obligation to weigh all the facts fairly before making a decision, and we don’t have all the facts yet,” Jones said, breaking from many Democrats who believe that the loose transcript of a phone call and a whistleblower report, both already public, prove Trump abused his power by asking a foreign leader for a political favor.

“What I have seen so far raises legitimate concern for our national security and there appears to be evidence of abuse of power. I hope for the sake of our country that we can find the truth together,” Jones said.

Jones’ political risk on impeachment includes creating an issue to drive GOP turnout. A vote in favor of Trump could also be distasteful to the Democratic base and donors that provided the strong support to propel him to victory in 2017.

“I think it’s a damned if you do and damned if you don’t kind of deal,” Hughes said. But Hughes downplayed the political risk to Jones because he likely wouldn’t be getting the votes of “die-hard” Trump supporters anyway.

Zac McCrary, a pollster and former communications director for the Alabama Democratic Party, said he thought the risk of an acquittal vote would be minimal, saying it would be hard to see Alabama Democrats abandoning their sole successful candidate.

Pharmacist Steve Crainich, a 55-year-old lifelong Republican, says he’s undecided about whether he’ll vote for Jones. He was among those who crossed party lines, angering some in his family, when he helped start a Republicans for Doug Jones Facebook group in 2017 because he couldn’t support Moore.

A Trump voter, Crainich said he’s looking for more information on whether the president should be impeached and removed from office. But like Jones, he has concerns about Trump’s actions.

“The things that he’s done are like: What? What the heck are you thinking?” he said.

When asked about if he has concerns about impeachment investigation affecting the 2020 race, Jones has said he is frustrated by the media framing the issue in political terms. He tried to stress that again at the town hall.

“If,” he said, repeating the word to emphasize the uncertainty. “If it comes over to the Senate, then I will vote my conscience based on the evidence and not the politics of anything.”