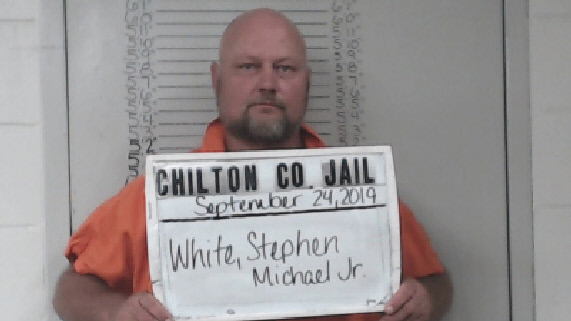 A local man wanted by the Chilton County Sheriff’s Office was arrested Sept. 24 after a tip pointed authorities to his possible location.

According to Sheriff John Shearon, his department received a tip that Michael Stephen White Jr., 47, may be traveling on Highway 31.

Shearon said that his investigator covering the case and a member of Jemison Police Department covered opposite ends of the highway before the Jemison officer pulled White Jr. over in a traffic stop, whereupon he was arrested on warrants.

The case against White Jr. goes back several years to 2002, where the first of the alleged crimes he has been charged with stems from.

According to Shearon, someone came forward about a month ago and told CCSO of White Jr.’s alleged criminal activities in the past.

Warrants were attained, and authorities have been searching for White since that time, including putting his info on social media.

White was admitted into the Chilton County Jail at 5:50 p.m. Sept. 24, according to online records.

He has been charged with rape-strong arm, incest-child, enticing a child for immoral purpose-girl and two counts of sexual abuse of a child less than 12 years old.

The sexual abuse charges stem from alleged incidents in March 2002 and April 2012. The other charges are listed as April 2014.

Shearon said he would like to thank the members of his department for their work in the case as well as Jemison Police Department for aiding CCSO with the apprehension of the suspect. He also thanks those people in the community who submitted tips, one of which aided in White Jr.’s arrest.